Your diligent conference registrars have been submitting their latest registration information to us this week, and we have now updated the Calendar page with some waitlist information.

All Star I, All Star II, International Affairs, and Life on a Star I are currently reporting a waitlist. Contact the relevant registrars for details—short waitlists can sometimes clear due to cancellations!

Some conferees have been getting in touch with us to ask questions about Manager’s Cottage, the new housing option for the 2007 season.

Manager’s Cottage is a cozy house on the main footpath between the front porch and the chapel. Traditionally it has housed the island manager or other staff. This year we are pleased to make it available for the first time to conferees as housing for your stay! The Cottage’s three bedrooms, living room, and bathroom make it an ideal comfortable space to share with extended family or groups of friends.

You may request the entire cottage or inquire about partial availability—check your the registration page for rates and contact your conference registrar today to see if Manager’s is still available!

We’ve prepared a flyer with the above information, in case you want to print it out and share it at a church meeting or with friends & family.

* Shower use is only for registered guests of Manager’s Cottage. Showers will be allowed only on regular conference shower days. 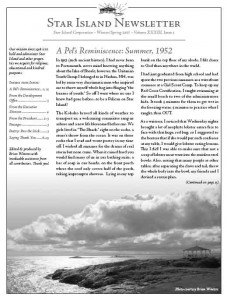 NHC has confirmed their boat times—conferees will depart Rye on June 23 at 2:00 p.m. and depart Star on June 30 at 8:15 a.m. (These times supersede those listed in the Blue Book; please confirm all times with your registrar before traveling.)

Visit the Registration page and Calendar page for more details.

Please note that several other conferences have extended their application dates in light of this year’s Blue Book production delay. From now on, we will generally post notifications about changes on this News page and the most up-to-date information is always available on the Calendar page.

This letter was recently mailed to Shoalers who expressed an interest in the 2007 Chapel project.

In January, I informed you that Star Island Corporation will be adding a second means of egress to our historic chapel building. We have now finalized a plan for this project and are excited to tell you about it.

This project has two major components: a door and a path to the door. Both are described below and we have also included drawings of the proposal—an internal rendering and an external topographical view.

Our plan is to put a door in the rear (west-facing) wall of the chapel. The door will go out through the center of the rear wall, through the rear wall of the bell tower. As many Shoalers are aware, there is clear evidence that at one time, likely before the bell tower was constructed, there was a door in this same spot in the chapel. Thus the location of this door has historic precedence. We have had a number of stone masons examine the bell tower to make recommendations about door locations and stability. Putting a door out the rear of the bell tower, rather than using the small existing side door in the bell tower, will allow us to have a standard sized door and an exit that goes directly out of the chapel rather than involving a tight turn. This will be easier on an every day basis, and certainly will be easier in any emergency situations.

Our plan also includes a new path and ramp to the chapel. The ramp will be constructed primarily of earth with stone walls. It will start at the rear of the chapel at the new bell tower doorway. It will swing immediately to the left and will run along the south side of the chapel. It will connect to the main footpath on the east side of the chapel. In a separate decision, the board of directors had decided to surface the footpath between the main ramping system (by Cottage A) up to the chapel to improve access. By surfacing the path and the new ramp with a surface suitable for wheelchair passage we will dramatically improve access for those with mobility challenges. There are parts of the path that are steeper than recommended for wheelchair passage, and thus someone in a wheelchair might need assistance in passing on those parts. However, we see this as a great improvement in chapel access.

As noted in prior letters and discussion, the primary driver of this project has been fire egress. We have met with the Rye Fire Chief and will be submitting this plan to the Rye Historic District for consideration this month. If the plan is approved, we will be able to have 80 people in the chapel rather than our current limit of 50 people. Both the fire chief and the historic district leaders have visited the site and stated verbally they think this is a concept with merit.

As noted before, assuming this approval process goes according to plan we anticipate starting work in September after the last guests have left the island. This project will take several weeks once started, so we felt it was important to start work after summer to assure no one’s chapel experience is disrupted during the season.

How Can You Help?
It is time to raise funds for this exciting project! Already numerous Star Island Community members have stepped forward with donations for this endeavor. Gifts total $16,000 and pledges total $1,500. We believe the total cost of the project will be approximately $45,000. We are still seeking $27,500 in funds, and would very much appreciate the opportunity to include you in this important effort. Any funds raised in excess of the project cost will be placed in the Permanent Trust to continue to build long term financial strength for Star Island.

If you would like to contribute to this effort please send contributions to the Star Island Corporation office, marked for the chapel door project.

Numerous people have inquired about volunteering for this project as well. If you are interested in volunteering please get in touch with Sumar or me (Contact Page). We will be looking at volunteer opportunities as we develop the scope of work for the project.

We very much appreciate your dedication! 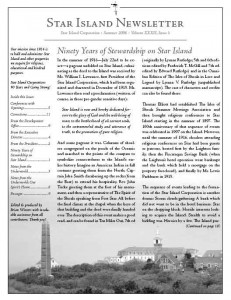 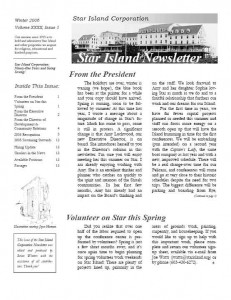 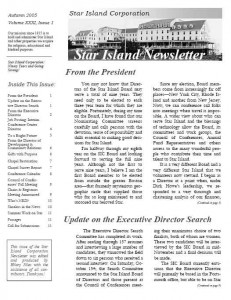 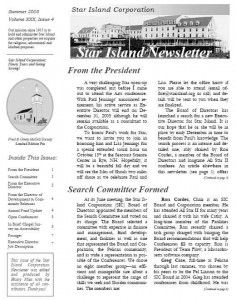 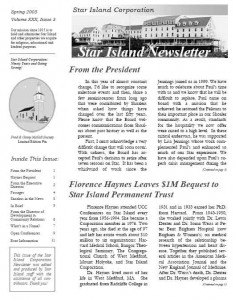