We are pleased to reprint Deborah Weiner Soule’s presentation given at the spring 2010 annual meeting.

I know that, with your help and participation, we could fill several hours sharing stories about Dave and Edith Pierson, who the Corporation honors today with this award.
Why do we honor them today? We know that Star Island is that unique place, where families come for generations, and then pass the traditions on. And Dave and Edith were central in shaping both traditions and the Star experience for many of us, me included.
They were indefatiguable, and took their role as senior staff seriously, knowing that their mentoring could help young adults not only come back, but lead in turn They led by example. There was no task that he wouldn’t do and that made us want to work all the harder.
Nancy Meyer remembers, “Dave was quiet, patient, and unfailingly kind. He used to urge us to take days off, to avoid burn out. When we’d ask when his last vacation was, he’d answer, ‘every day is a vacation.’ And there was even a song made up about Dave: “Roll, roll, roll your boat, gently down the lawn. How can a man who’s twice our age still be twice as strong?” 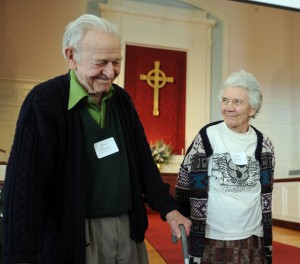 Bruce Parsons said, “There was a reason why we called Edith,’ Ma.’ She and Dave taught us about work ethics, global and environmental awareness,” and what it means to be a caring community: Although Edith was violently seasick – she always took trips on boats by lying on the floor of the boat as it crossed – she was the quintessential island presence. And she, too, was an incredibly hard worker and role model. Scott Stewart remembers, “In 1975 I was working for Edith during open-up, moving rocks from one side of the Island to the paths leading out to the John Smith monument. This was tiring work, and one afternoon, I was pleased to see rain coming, figuring this would allow me to get some rest from moving rocks.

“So the rains came, and in my best acting performance, I went up to Edith with tears in my eyes and told her I would not be able to move any more rocks that day because of the rain. She said, “this is great, because now you can go out in the rain and rock back and forth on the rocks and settle them nicely in the mud.” Which I proceeded to do, because when someone tells you to do something with that much joy in their voice, you know it must be the right thing to do.”

Dave showed up in the kitchen every single lobster night and stood there, making sure the steam worked – not a dinner where you wanted problems! When something was broken, he would appear, almost without being called. Nancy Meyer reports, “We used to joke, if you needed to see Dave all you had to do was stand on a chair to paint a ceiling or reach something high up. (We weren’t supposed to use chairs as ladders and he had an UNCANNY knack of showing up just as we were doing the thing we weren’t supposed to be doing.)”
They lived for a while in the Engineers Cottage, near the back door of the kitchen, and it wasn’t long before it became known as The Piersonage. Dave became known for his dry, humorous quips: “We started late, so we’d better end early,” and “Working hard, or hardly working?”
Scott Stewart said, “Dave is one of the great teachers I have ever been around. What made him great was his use of the word “oh”. Dave would come up to you when you were working on a project and ask you how it was going. He would intently listen, and if at any point you described something that didn’t sound right, Dave would simply say “oh”– which meant either that you were on the wrong track or that you should explain more. A soft “oh” meant you probably did something a little wrong, but the louder or more toned the “oh”, the more you were doing it wrong. And he would engage you, and sometimes you would convince him that what you were doing was right and sometimes he would gently lead you back in the direction of the correct fix. He rarely if ever lost his temper. He always could do a project faster and better than us. But he understood that if he taught us, together we could accomplish great things. And we did.”

Edith’s sense of social activism led her to pen “Star Island is our Spirit’s Home” so that the racist “Marching to Praetoria” words that ended every Pelican Show were replaced with something that fit more with Star Island’s values. She was a passionate advocate for justice and equality – which the Pelicans adored.
Both Dave and Edith were modern models of the fishermen and their wives who lived on the Shoals for centuries. Although they would receive occasional deliveries of their standard order — milk and broccoli — from the mainland during the winter, they gleaned what they could from the sea, walked the rocks and the closed buildings, and, accompanied by their dog, SmuttyToes, checked the neighboring islands to make sure that all was well. Their boat was the Sturgeon, and those Pelicans who were out on the water with Dave would sometimes hear the call between island and boat: “Sturgeon, Sturgeon, Sturgeon. This is Sturgeon on the island calling Sturgeon on the water.”
Carey Kasky summed them up this way: “Dave taught me about quiet leadership and how to set a good example. Edith taught me how to respect nature and find beauty in all that is.” They were, and are, island originals, and richly deserving of the Star island Corporation’s Maker of Light Award. Bravo!