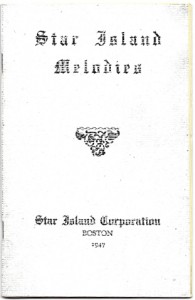 Andy Bowen, long-time Shoaler, has brought back Star Island Melodies, a beloved songbook known to many who were on Star Island when Fred McGill was about. Andy has many fond memories of Star Island in the mid-1950s and the song book, given to him by Fred McGill, has been an important resource for Andy ever since.

Andy had reproductions printed at his own cost and the books were on sale in the Book Store on the Island this summer and will doubtless be there next summer as well. If you can’t wait until then to get your copy, let Andy know.

Andy’s wonderful letter about the song book and his experiences on Star Island:

I think it easiest to start at the beginning. I first attended the RE Conference at Star with my mother in 1950 or 1951. I began attending the youth conferences in 1952 and attend all, except 1955 until I graduated High School in 1956. During my high school days I was on the planning committee for the youth conference in 1953,1954, 1956. During those years I was also very busy with the then New England Regional Committee. Or NERC, as it was known. I was a Pelican in 1956 although I worked in the “KIBOKO” for the Moura Navigation Company, not for the Cooperation. I did pay my dues and I did participate in the Pelican Productions and the chorus. I moved to Arizona in the fall of 1956 and my next visit to the island was in 1958 for a day only. I came east many times during the 60’s and made a day trip out to Star every time I could. In 1968 I moved to Vermont and was able to visit more often. I was at several Pelican Reunion weekends and a young adult conference, although I was not a young adult by then. I came to Florida in 1989 and did not get back until about 1998 with my now wife Lynn. We made two day trips until 2007 when we were late season Pels. We paid our dues to be Pelicans and I wear my shirt often. I had hoped to develop a Pelican Alumni group as a $$ source, but I think one needs to live closed to Portsmouth to do that.

I first became a Unitarian at age nine. My adolescence was all AUY, order ultram over the counter then LRY with involvement at the local, regional, colligate and national levels. But of it all, the time spent at Star was the most formative time of my life, ever. Star Island is my spiritual home. No where do I feel more at piece, at ease or whole. When I get that overwhelmed feeling I sing the YPRU song to myself; #18 in the Melodies book. I easily recall the youth of the past singing many of the songs in the Melodies book while gathered around the old upright piano in the lobby. Some of the songs were sung to new arrivals at the dock and some were sung to those leaving at the end of a conference. Answered of course with screams of “We will come back”. And I do. Daily in my mind, annually if possible. (We missed last year, but will be out this summer.) I really want to be a carpentry shop volunteer for a month. But Lynn has no interest in volunteering again and I really do not want to come out alone. I keep telling her she could be in the gift shop, but no luck.

I purchased my copy of Star Island Melodies when I was out back when Fred McGill was still able to be there and he signed my copy. I was amazed that he could remember me from 1956 when I was the recreation chairperson and brought many cases of confetti to the island for a “New Years in June” Friday night party. Each of the 200 plus attendees got their own bag of confetti. Needless to say I was not popular with housekeeping that summer. When I arrived in 1958 and was walking up the front stairs to the porch, Fred and Ginny were standing the top of the stairs, as they did, and I was greeted by “We’re still cleaning up your damm confetti”.

Boy did I digress. It is now Sunday afternoon and we are home safe and sound after being rear ended by a friend of 20 years in the church parking lot.

So as you can tell my special place in this world in Star Island. Since I can only afford to make a small monthly contribution to the annual fund I thought it might be a good fund raiser to reprint the “Star Melodies.” I know it is a bit dated, but at the same time it represents a real time in Island history and many of the songs are still timely. Some not so much.