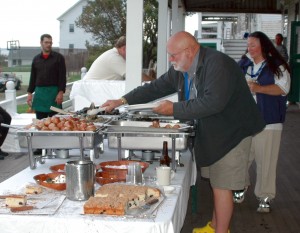 Star Island welcomes Matthew King, who brings his creative culinary talents to the Shoals kitchen this summer as the new food service manager. King, a life-long Shoaler, will kick-off the season by catering the post-race reception of the Gosport Regatta on June 11 at the historic Oceanic Hotel.

King first visited Star Island with his family in 1972. He later returned as a member of the seasonal staff, affectionately known as Pelicans, where he worked with the “waitrae” (wait staff) and later as a “kitchie” (kitchen staff). He continues to visit Star Island each summer with his son and daughter as a conference guest and volunteer.

King began his work in the hospitality field as a teenager. He attended the Culinary Institute of America in 1985. King has experience in culinary tramadol buy online florida preparation, facility design and maintenance, financial accountability and client management and relationship building. His most recent experience included 10 years at the Boston Culinary Group where he managed nine large restaurant operations including the New England Aquarium as the regional manager.

“I look forward to serving Star Island visitors and guests at the Oceanic Hotel this summer season with an all new Island flavor,” said King. “We hope to see you all at the Shoals very soon.”

King is crafting a menu for the Gosport Regatta party that highlights traditional New England favorites.