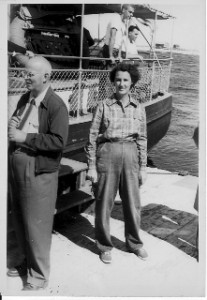 Rosalind “Rozzie” Holt, age 95, passed away peacefully on May 19, 2011 at the Lafayette Center in Franconia, NH.

She was born in Boston, MA on March 3, 1916, the daughter of Whipple F. and Bertha L. Smith, and grew up in Swampscott, MA. She was a graduate of The Winsor School in Boston and of Vassar College, class of 1937.

She was predeceased by her husband, Hermon Holt, 3rd, in 1994 and by her sister, Virginia Symonds in 2004. She leaves behind her daughters, Carol Mairs of Palm Bay, FL and Barbara Holt of Dover, NH; her son, Robert Holt and his wife, Katharine of Bethany, CT; grandchildren, Karen Mairs French of Dover, NH, Wendy Mairs Ross of Chesterville, ME, Ryan Holt of Bethany, CT; great-grandchildren, Preston Ross and Gracie Ross of Chesterville, ME; several nieces and nephews.

Fred McGill, on page 256 of his 1984 book, “Choose Something Like a Star,” offered A Tribute to Rozzie Holt. Additional biographical information is included on pages 203-204.

Roz was familiar with the Shoals during the 1930s, her grandchildren report, working as a staff waitress and making the acquaintance of “Uncle Oscar” Laighton. She began her second period of association with the Star Island Corporation in the early 1950s. She was an avid volunteer, identified in minutes of several Star Board meetings, and soon became Head Housekeeper. Some of us remember seeing her, during changeover in the 1960s and 1970s, carrying a mattress under one arm as she moved it from one building to another. After a full day of changeover, she’d be at the hotel desk, ready to welcome in the incoming conference, giving out room assignments and answering questions.

She trained her chamber crew to meet her exacting standards. Liz Erickson, who assisted and then succeeded Roz as Assistant Manager and Head Housekeeper, recalled, “I still clean bathrooms the way Rozzie taught me (from the top down, focusing on a different part of the bathroom each time). Then, there are those hospital corners…[my children note that this is the way] I make beds, with the tri-fold foot blanket and towel sets for guests.” 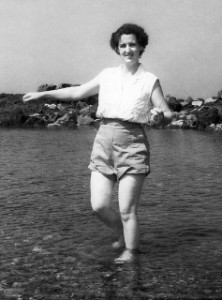 She was a master of frugality, making every penny count in the tight SIC budget. She also held to a work ethic that was tough but fair and served the island well. Bruce Parsons recalls, “During open up we would work from breakfast all day and again after dinner. I never remember being told to do this but it was expected by example, and all of us did it, including Dave and Edith Pierson, and Rozzie. We rarely took days off, we were always tired but we never complained. We were not special or unique — we were just lucky to be on the Island at a great time and have such great mentors.”

Rozzie was the person responsible for making sure that Pelican ‘girls’ (as they were known in the 1960’s) knew how to wash their hair in just three pitchers of cistern water, how to take a bath in the ocean, using Dial soap. She also patrolled the halls of the third floor of Oceanic at night, making sure that the girls were in their rooms and that the boys were not! Speaking of Pelican boys, she had a special fondness for certain Pelican boys, making sure that they had choice rooms on the fourth floor of Gosport, or extra cookies or other baked goods as treats for their hard work during open-up and close-up. And she had a strong friendship with the other leaders of Star at the time, Fred McGill, Harry Lent, Theo Nash, and Lenny Reed, among them. Her friendship extended to trips, late at night, to Cedar island to enjoy some alcoholic libation and company with fisherman Norman Foy and his son, George.

In 1975, with the resignation of Fred McGill, Roz became Assistant Manager (the first woman to hold that position) at the request of Manager Bob Jorgensen. It was probably the first time she was paid anything close to what she was worth. 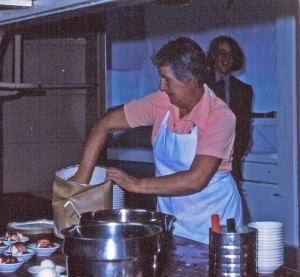 Rozzie was one of the primary funders of the Rutledge Marine Lab on Star (dedicated in 1969) and continued her support of the Lab for many years. Deeply connected to natural history on the Shoals, she became a fixture at Shoals Marine Lab on Appledore, following her retirement from the Star Island staff in the mid-1980s. She was an accomplished birder, and in her later years she supported the Island Institute and the Audubon Society. She often sailed on the schooner Lewis R. French. Nancy Meyer notes that several years ago, she saw the boat come into port and “I asked them if they remembered Roz. Of course, they remembered her fondly.”

She was a demon at the card game Hearts, having a special way of holding her cards, and she never lost a hand. We also recall Roz’s passion for knitting, and the dozens, if not hundreds, of Pelican offspring who were blessed, coming into the world, with a hand-knit item from Rozzie! In fact, at an early 90s Pelican Reunion, the young PIT (Pelican-in-Training) Crew members discovered that they all had ‘Rozzie socks’!

Rozzie loved the Pelican community, and kept scrapbooks full of photos of her friends and adventures, treasuring the Christmas cards which showed Pelican babies and growing families. She was always ready to cook a turkey to help celebrate a Pelican wedding, sit down and reminisce, or help out whenever she could. She was an island original and, for those who knew her or only knew of her, the stuff of legends.