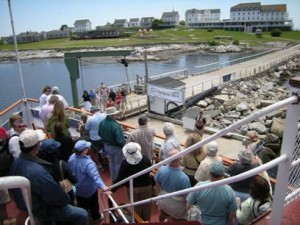 Star Island staff returned to the island Monday, August 29, the day following tropical storm Irene’s visit to the Seacoast Area. On Tuesday afternoon, retreat and conference guests made the one-hour trip to the island on board the Isles of Shoals Steamship Company’s M/V Thomas Laighton. Star Island, which is located about 10 miles southeast of Portsmouth Harbor, closed the day before Irene arrived due to predictions of strong winds and high seas.

Vicky Hardy, chief executive officer of the Star Island Corp., said she had no doubt that the center could withstand the winds, but the decision to remove all but essential staff members came down to the potential of not being able to get people off the island in case of a medical emergency.

Facilities Superintendent Jack Farrell remained on the island with a core group of 11 supervisors and managers. He reported strong winds and high seas, but minimal damage to the retreat center facilities.

Hardy understood from the Coast Guard that the storm brought 10- to 12-foot seas with winds over 50 knots. “We are happy to open up and welcome everyone to come out to Star Island, especially with Labor Day weekend coming. We will stay opened, as planned, through Sunday, September 18.