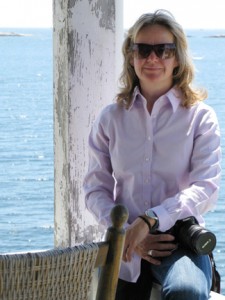 Jo Cooke, a travel writer and editor for two of the United Kingdom’s largest women’s magazines, visited Star Island recently. The visit was arranged by the Portsmouth Chamber of Commerce, who manages foreign media visits to the Seacoast region. Victoria Hardy, CEO of the corporation that manages Star Island, served as Cooke’s host for the day and introduced her to the island community.

Cooke was most interested in the British-related history of the Isles of Shoals, and especially the infamous Smuttynose murder. She was especially intrigued by the Literary Festival in August featuring Anita Shreve, who is quite popular in England with Cooke’s readers.

The trip included visits to the Wentworth by the Sea Hotel, the Discover Portsmouth Center and various other sights in the region.