Our boat – a ketch named Karen Lee – was anchored in Gosport Harbor, and while my husband remained onboard to tend to nautical issues, I rowed into shore and headed for the Oceanic Hotel. My first and only other visit to Star had been in 1982, though I’d never forgotten the special place. I was grateful that, despite an ongoing conference, people out on the boats are allowed to come ashore. 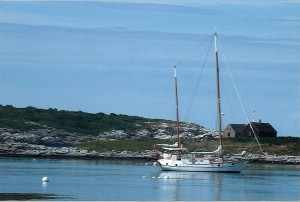 Earlier this same morning, upon waking in Star’s harbor, I’d found myself humming the old Irish hymn, “Be Thou My Vision.” I never wake up humming – much less hymns – and the tune was still in my head as I walked around the island. A long-time volunteer named Leslie answered all my questions and made me feel welcome. I moved towards the bookstore and suddenly became aware of a piano in the nearby parlor. Not just any piano music however, but the very same hymn I’d woken up to humming. I couldn’t believe it! Further to my great surprise was the fact the hymn was being played by a very young, angelic-looking boy, all by himself at the upright, playing his little heart out. My only previous connection to this tune had been a few months earlier when it was played at a memorial service for a beloved relative. Coincidence? That person’s Presence? In any case, I felt like I’d entered some incredible Spiritual Experience.

Which continued! As I neared the old stone Chapel, people were singing a lovely Shaker hymn. (Gee, I thought to myself, the music here is sure good.) The Chapel’s windows were all open and those who couldn’t fit inside had spilled out onto the rocks, now listening to a minister tell a funny story (laughter lilting as windchimes), then something about a couple wanting to renew their vows. I sat down on a nearby rock as everything grew very still; all you could hear was Nature as, next, the voice of an older man passionately expressed undying love for his dear wife. His message was short and to the point, but it was the best sermon I’d ever heard on the subject. It was so beautiful.

Like some kind of a butterfly flitted, next, to the sweet Library and Vaughn Cottage where Melissa the Curator brought my attention to a former Pelican: Bobby Wharem. A quote about his quiet, yet helpful, strong life was so uplifting I wrote it down. The experiences I was having that morning just kept going on and on! Rather reluctantly I headed back to the boat.

My husband, as always, met me at the boat ladder and helped me tie up the skiff. “You sure look like you had a good time!” he remarked as, apparently, I looked radiant. We sat down on deck, heads pointing towards the Chapel. I attempted to tell him all about the couple renewing their vows, but all I seemed able to say however as my eyes filled with tears was, “It was so beautiful!” And it was.

My sincere gratefulness to Star Island and all the conference attendees for allowing this sailor to step ashore and have a little taste of what attending a conference or a workshop must feel like. It is truly another world on Star and although the s/v Karen Lee has taken me and my husband to many lovely, distant ports and islands, Star Island, to me, is like nowhere else. Though it is winter as a I write this, Star clearly calls to me: “You WILL come back!”

I sure hope so.