Sharing Star Island just got more creative thanks to an idea from All Star 2 Shoaler Roger Kellman. 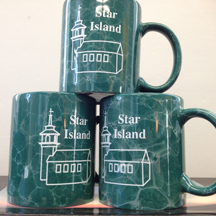 If you like this idea, start it at your congregation! Contact your minister, parish administrator, or social hour coordinator to ask if you can donate Star Island mugs. We suggest emailing our friends at the Shops On Star to see their mug offerings, or use an online company to create your own.

If you start your own Star Island mug project, let us know! Email ambassadors@starisland.org with your Sharing Star Island stories.