By Kate Leigh, Massage Therapist
First a little about my her-story with Star Island. I used to come out here as a child. My family went to the Unitarian church. Star Island happens to have a strong affiliation with this church group as well as some others. The island is part of a group of islands, spanning the border between New Hampshire and Maine. Star falls on the NH side. I grew up in Massachusetts, so we drove up to Portsmouth to catch a boat out. Some people come here from all over the world though. The island group is known collectively as the Isles of Shoals. I first came here around 1965, or perhaps earlier, and continued to visit Star Island for a week each summer until I graduated high school.

After 1969, I traveled and various things happened in my life. Eventually they lead me back to the east coast and to New Hampshire, where I have lived since 1982. So I naturally gravitated out to the Shoals. In the lore of these islands, when you have been coming out for a long time, you are an Old Shoaler. That’s me.

Star Island is the conference island and has a big old hotel to house its many guests during the summer season. All the old grand hotels in the days of the Shoals have burned down, all but this one, which has been brought up to acceptable fire safety standards. 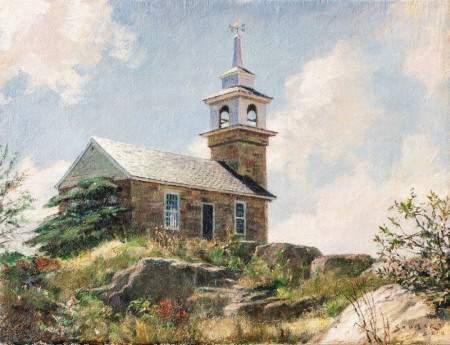 I now come to the island as a massage therapist, on duty to serve the people who travel out for various types of conferences, as well as the gentle people who maintain and run the island throughout the season. Sometimes I am called upon to work very hard, maybe seeing twice as many people as I would see on the mainland in a week. I thrive on being so busy, and I take it as a challenge to take extra good care of my self!

The Shoals are old, nobody knows their exact age. They have several large cairns, piles of shards of stone, around their outer edges, whose origin and purpose are speculated to have something to do with sightings from approaching ships, but they are a part of the mystery. Some of the islands, the largest ones of which are maybe 50 plus acres, were heavily populated in the old days of fishing industries. The people who lived here then were hardy souls, rebels from the main, who wanted the hardships of freedom as their daily fare. Gradually, civilizing influences such as spirituality entered in to their populations.

The real denizens of this place are the fish and the birds. The quantities of fish may have diminished, but the birds, especially the gulls, survive. There is little vegetation beyond a scruffy covering of wild rose, bayberry, and sweet fern, except the results of efforts to cultivate flowers and vegetables seasonally, by the lovers of this place. Few trees can strike roots through the granite ledge to do well out here. But there is plenty of rock. The rock has been the carving stone for the seas, which has sculpted these isles and their harsh lines.

Even in my lifetime, I have seen so many people come and go and come again, that I acknowledge the drawing power of these rocks in the sea. In fact, part of the Star Island lore is the chant, ritually sung to departing ships, “You will come back” and arriving vessels, too “You did come back”, from the long stone pier that juts out on the island’s north face. 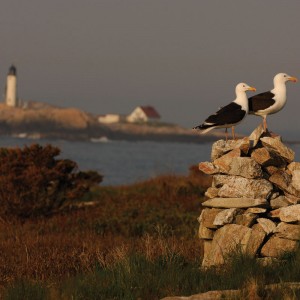 As their massage therapist this week, busy every day with them, I watch the world from my large breezy window facing the harbor. I listen to their stories, whether they be returning or here for the first time, whether they be young or old or in between.

My room is spartan, like the rest of the rooms in the old hotel. It’s simplicity is reinforced by my hands on their skin with oils I make from plants, with the vibrations I can offer to instill in their tissues, uniting them by the delicate threads of caring with nature and the elements of the surroundings. It is an enhancement, having nothing to do with life’s gaudy trappings. We have chosen this dropping away from the mainland, no traffic or parking headaches, basic meals are laid before us three times a day, water is conserved, conversation with each other is sought, meaning enters in again.

As the week grows long, as it takes its sweet time unfolding, as the people rise early to catch a glimpse of sunrise, or sit on the western edge to devote their eyes to the setting sun, as we sometimes watch a lightening show grow across a huge sky, untethered and free, our faces change. We appear as we were before life wrung the smoothness out of us, and exchanged our smiles for stress lines and wrinkles. We rise early, when it is quiet, except for the din of the gulls, like a parallel community here, and we dip our feet in the ocean, a baptism of ourselves by nature’s lifting and falling water levels, constantly refreshed. 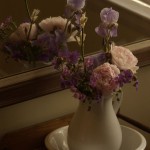 I was getting ready for bed last night, having walked down the hall to the third floor’s communal bathrooms. We accustom ourselves to seeing strangers brushing their teeth, washing up there. A woman came out of the door to one especially large stall, which is from the original lay-out of the hotel and has not been modernized yet. The modernization comes with the passage of time and the necessity for replacing worn-out structures. Some of the other communal bathroom areas have already undergone these renovations. But this large bathroom has a huge open window facing the south west. The view of the ocean, slapping about the curved shoreline, is arresting. She came out with a huge smile on her carefree face, a woman only slightly known by me, as there are maybe three hundred people on island during a busy conference week. I was standing at the sink with a toothbrush in my mouth. She beamed at me and simply said, “I love this bathroom!” That is Star Island.