by Dale Slongwhite, Writelines
Twelve years ago on a broiling August afternoon when nothing seemed to cool us off, I said to my husband, “I think I remember seeing a sign in Portsmouth about a ferry tour. I think if we got out into the ocean, we’d cool off.” 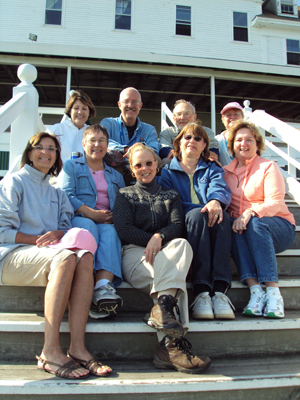 So off we went. I stood on the bow of the Thomas Laighton and allowed the breeze to bring the relief we’d been seeking for weeks. Nine miles out to sea, the ferry slowed down, pulled up to a dock, and people chanted, “You did come back! You did come back!” I had no idea what was going on, but I joined the line to disembark. Unfortunately, the captain informed me I’d purchased the wrong ticket and couldn’t get off. I took one look at the expansive lawn, the spacious veranda surrounding a three-story white building, and I knew that indeed, I would come back.

The next year, we purchased the right ticket. I stood on the lawn and waved off the boat that would return in two hours to pick us up. I was totally clueless as to where I was or what would happen next. It didn’t take long for me to purchase a lime rickey, sit in a rattan rocking chair staring out to sea, and say to my husband, “I have to figure out how to sleep on this island.” I approached a teenager manning the desk and asked with hesitation, “So, does anyone ever get to sleep on this island?” “Oh yes,” she said. “There’s a schedule on the far end of the desk. Actually, there’s a women’s retreat coming up.”

On a Friday a few weeks later, I packed my bag and stood alone on the dock in Portsmouth amidst four dozen women greeting each other as long lost friends. I had planned to remain incognito the entire weekend, to explore, to relax, to read. But the brochure had said if you wanted to share in chapel, bring something. So I did. Before I knew what had happened, I had organized a group of six women to present a program. Along with the others, I accepted the Paul Revere-style lantern and walked silently up the rocky path to the tiny stone chapel. I stepped down three steps, hung my lantern on one of the black, wrought-iron crosses, and welcomed the group that had so graciously welcomed me.
A year later I trained to become a creative writing workshop leader. The first thing I thought of was Star Island. I called and asked if they allowed others to present programs. “Yes,” came the reply. “In September as long as it is spiritual or educational.” So I booked a three day writing workshop.

I have since moved to Florida, but there is no way I would miss September on Star Island. 2014 will be my tenth year boarding the Thomas Laighton with a group of writers, many returnees, some newbies. Actually, I have two groups now. A Monday – Friday group and a Friday – Sunday group. I have held writing retreats in many places, but nothing compares to the ambience of Star Island.

Feeling inspired to write? Send memories of your first Star Island exprience to ambassadors@starisland.org and be included in our #ShoalerVoices. And, join in a 2014 Writelines retreat.