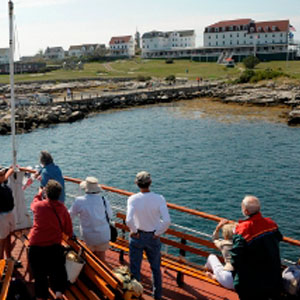 I first set foot on Star Island in 1958 when our family decided to take a day trip out of Portsmouth to see where my brother would be attending a church conference later that summer. We went aboard the Kiboko, and I remember the passenger pigeons that were let go, with the number of people eating in the dining hall attached to their legs, so that enough food would be ready when the boat docked. We brought a picnic lunch and ate on the rocks. My sister’s and my church conferences had been through the Massachusetts Conference at locations in Massachusetts and New Hampshire, but Star now seemed to be the perfect place, so we signed up for the United Church of Christ Youth Conference in the summer of 1961, and came for three years, followed by three years with a college group — not wanting to go elsewhere! It always felt like another world, being away from the mainland and cares, with ocean views and breezes, and classes that I still recall, like Prayer Lab, Wildflowers of Star, bell-ringing, sunrise services on East Rock, and most importantly, the long-time friendships formed. I still keep in touch with several that I met there in the 1960’s. We were even allowed, “in those days,” to take the rowboats to Appledore! This was before the Shoals Marine Lab was established, and we left the boats, beached, while we explored the deserted island and even climbed the Coast Guard Tower, boosting each other up on rusted bed springs, to get a view of Star, only to find our boats nearly too far from shore when we returned….Photos also show no life preservers! Think of the liability! 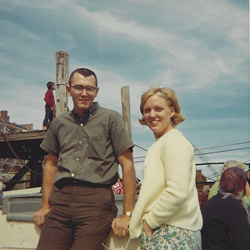 During that time, I also met my future husband, Dave when he came to that last year of the college conferences on Star. He’s always said that if he didn’t pass the “Star Test” of liking it as much as I, then I wouldn’t have married him! He likes maneuvering into the Lemon Squeeze; rowing the boat from Star Island to Smuttynose ; viewing boats in the sheltered harbor every day, and especially on Regatta day; visiting the Shoals Marine Lab on Appledore, and chanting the cheer “S-T-A-R…You Did Come Back!”

Over the years, we made several day trips out, along with our two children, but it wasn’t until 30 years later that I went back to stay. In 1997, my younger sister read about the UCC Laity Conference theme as being Generations, so she suggested that the three sisters attend together. We did, for five years. It was wonderful to be back on that beloved island with new generations of people, more to meet up with every year. Later, two of our husbands also attended; now it is just Dave and me from our family at Laity. We have become involved with the Laity Steering Committee and look forward to our several meetings during the year with it all culminating at the Labor Day conference.

In 2002 and 2003, one sister and I attended “A Garden is a Sea of Flowers” on Appledore, which renewed my interest in Celia Thaxter and my dream of seeing her garden at last, not anticipating that I’d be able to visit at least once a year since. In 2004, Dave and I attended the first June Isles of Shoals Historic & Research Association (ISHRA) conference on “Native Lighthouses,” so got hooked with the ISHRA group, have gone to all of the June conferences since, plus joining ISHRA and attending the bi-annual meetings in April and November, thus meeting a whole new group of Star friends! We became Star Ambassadors and spread the word through our local church displays, plus newsletters, announcements and bulletin boards. We’re always open to promoting Star!

I even have a Shoals Room: when our daughter moved out, we hung pictures in Celia-fashion, and gathered all of my Star books, postcards, photograph albums and materials in one place. All visitors are welcome to a tour!

Why do we come back? For the youth and Laity conferences, it has been the spirituality, classes and lectures that make one think, doubt, contemplate, share; remembering the sunrise services on East Rock and participating in the hushed beauty of the candlelight services in the chapel. With ISHRA, it has been the history, learning, activities, and new topics of interest that inspire. Through all the years, the most important element has been the friendships formed that still continue. And among it all is that very special place: the sun, stars, seagulls, rocks, buildings, the ocean — sometimes calm, sometimes stormy, just like life — but a place we can return to, year after year, if only in our minds and hearts.