We have reduced the island diesel consumption from an annual average of 20,000 gallons to less than 15,000 (2013) through conservation and elimination of one boiler. We expect further reduction for 2014 with elimination of a second boiler and wasteful steam loop. 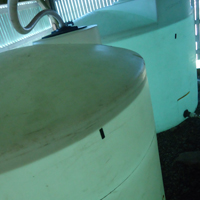 By start of 2014 season we will have moved away from steam generation altogether (reducing heat losses, insurance and maintenance costs), heating water for domestic and kitchen use through a combination of air source heat pumps (ultimately to be solar-powered), solar thermal panels, co-generation (waste heat from new generators) and limited point of use propane heaters. Engineering plan for 2015 to increase use of solar thermal as pre-heat source to feed heat pumps and kitchen. 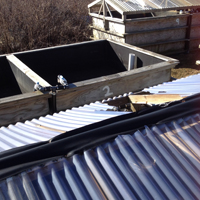 Continuing to reduce amount of trash sent to landfill (40% reduction in 2012, maintained through 2013) with additional 2013 savings realized through composting of cardboard, re-use of building materials, sale of recycled aluminum. 2014 initiative encourages aluminum beverage containers which can be collected and sold as high grade aluminum scrap in sufficient quantities. 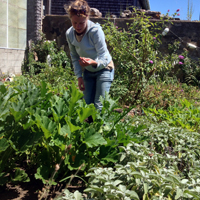 The Pel Garden continues to expand, producing over 1,000 pounds of vegetables for island consumption in 2013 and providing valuable constructive recreational opportunities for staff. WOOF program volunteering contributes significant labor and expertise to island vegetable and flower gardens. Pilot program in chicken raising converted 500 pounds of kitchen waste to 100 pounds of tasty barbecued chicken (program to be expanded in 2014). Continuing efforts to use island and locally produced food including vegetables, seafood and yogurt.

The 2013 Oceanic work produced lots of building material which is being re-used on the island where possible or sold to others for re-use. 2014 projects will continue to sort construction debris for valuable items for re-use. For 2014, waste glass will be crushed and converted to safe, valuable aggregate for island drainage, landscaping and infrastructure projects, saving transport and disposal costs, and providing vital material which would otherwise be imported at high expense.

Working with the New Hampshire Department of Environmental Services, we have eliminated the regulatory requirement for management of hazardous waste on the island, primarily through careful procurement (don’t buy any in the first place) and recycling and reclassification efforts (e.g. waste oil hazardous waste becomes waste oil for recycle which is non-hazardous and which can be sold). This effort has reduced disposal costs by more than $4,000 (since 2011) and reduced level of regulatory and environmental risk to SIC. 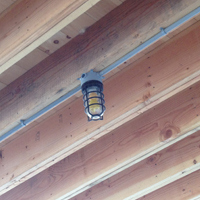 Domestic lighting requirements account for ten to twenty percent of power demand. We continue to reduce this load by implementation of energy efficient lighting and procedures to manage lighting requirements more carefully. A 2013 initiative to improve safety lighting on the Chapel path is a good example: LED bulbs and a solar powered ground lighting system (designed, installed and provided by Dick Case) added an important safety feature with negligible load on island electrical grid. For 2014, a major program to convert Lobby and other common lighting to LED bulbs, coupled with a program to encourage conferees to assist in conversion of guest rooms to LED bulbs (Isles of Shoals Association, UU “Adopt a Lightbulb Program”) will continue this process.

In 2013 a significant portion of non time sensitive laundry processing was moved off the island. This resulted in lower costs and reduced demand on water, power, hot water and wastewater resources. For 2014, new kitchen equipment will provide similar benefits. The new dishwasher will use one third the water of the present unit with positive impacts on water, power and wastewater systems. Point source generated steam cooking devices will utilize free waste heat from generators and highly efficient use of propane back up when required. Dishwasher and steam cookers will accept additional input from solar thermal sources which can be added over time.

Positive Relationships with Regulators and Advocates

Our initiatives and goals, as well as the collaborative nature of our process have resulted in recognized benefits. We continue to regularly engage with various aspects of the New Hampshire Department of Environmental Services in a cooperative and positive manner as a result of our March, 2013 summit meeting. Our growing collaboration withy the Island Institute of Rockland, Maine provides useful resources and experience from other islands from Maine to Alaska.

What are We Learning?

We are learning that the broader community responds very favorably to an organization that is actively seeking to become more sustainable, and that such response can make operations and innovation more predictable and positive. We are learning that sustainability is a process that requires constant attention and adaptation, and that the goal of a sustainable community can only be reached through an understanding of the integrated and interrelated nature of our activities and use of resources. And finally, based on the overwhelmingly positive response that our efforts have elicited from regulators, neighbors, colleagues, environmentalists, employees and stakeholders- we have realized that our new course towards a truly sustainable Star Island will likely have long term benefits that we are only beginning to appreciate, as we live our vision of creating an example of the world as it might ideally be.