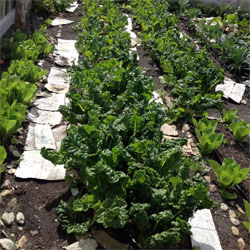 Celia Thaxter’s Appledore garden is probably the most well known of the plots out at the Isles of Shoals, but Star Island’s gardens are growing strong while supplementing staff and guest meals throughout the summer.

This year, the gardens were tended to by sustainability intern Elspeth Pennell as well as numerous volunteers who helped from a few hours to several days. There are three gardens on Star. The largest, called the Pel Garden, started over five years ago as a small plot tended to by Pelicans — our summer staff — during their off time. This garden has grown over the years and includes two levels and a small greenhouse. Vegetables like summer squash, zucchini, and kale were grown in this garden over the summer. A small garden behind the Founders motel unit started as a potato patch in 2013, and grew kale and other leafy greens this summer. The flower cutting garden behind the Elliot Memorial Building (EMB), where our winter caretaker lives during the off-season, continues to be a flower garden with the addition of vegetables this year.

The goal of the gardens is to reduce our need on mainland food as part of a substantial sustainability effort.

By September 1, 2014, the gardens have produced a total of 910 pounds of produce. Here are some of the numbers from within that haul:

If you have ever participated in a CSA, you’ll know that sometimes you receive a lot of one vegetable at once. In a similar sense, we end up with a lot of certain items at once. For example, a plethora of zucchinis have led us to utilize the vegetable for interesting treats like zucchini muffins. Here’s the recipe our island bakery follows for these muffins (to feed approximately 300 people):

Pre-heat the oven to 350 degrees. Mix the eggs, oil, sugar, zucchini, and vanilla in a gigantic mixing bowl. In a separate gigantic bowl, mix the remaining ingredients (plus chocolate chips, if you prefer). Pour the dry ingredients into the wet ingredients in three parts, and mix until combined. Pour the batter 3/4 of the way up into prepared muffin tins. Bake for 20-25 minutes.

Starting in 2013, a flock of chickens was added to Star’s sustainability causes. These chickens are fed leftover bread and vegetables from staff and guest meals. The chickens are instrumental in reducing the amount of compost shipped off island. In 2014, the chickens have eaten 2,349 pounds of leftover food. The chickens, destined for an end of season staff bbq, will produce about 300 pounds of meat.