At 47 acres, Star Island’s relatively small size is providing ample space to create a model for sustainable communities. Our most visible endeavor in this effort – a solar array – started operating on November 19, 2014. The project is designed to deliver up to 60% of Star Island’s energy needs.

Star Island’s Island Manager and Facilities Director, Jack Farrell recently took a closer look at the solar work and came away with these sentiments: “This solar project helps us to extend our values beyond our island community. This shapes our reputation in the region. We look innovative, responsible, forward thinking, and capable. We are doing something bold and taking leadership in an area of our values.” 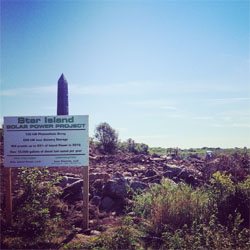 The beauty that is the solar project has taken time, and on occasion been a struggle after decades of only relying on diesel fuel for power. The project started with the search for a new Facilities Director and a three-year strategic plan that placed a great importance on moving towards sustainable energy and away from fossil fuels. Farrell’s hiring brought about an increased motivation to make that move, and soon ideas were underway.

The next stepping stone was a grant from the New Hampshire Charitable Foundation in 2012 for $10,000. Star Island used this money to hire the Island Institute of Rockland, ME to conduct a feasibility study of solar power on the island. After the study was completed, a Request for Qualifications and later a Request for Proposals were sent out, resulting in Revolution Energy as Star Island’s partner to design and construct a solar array to power Star Island. 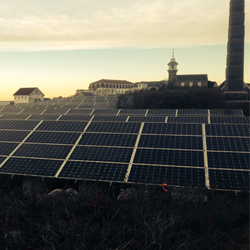 Over several summers, Revolution Energy met consistently with the Solar Project Ad-Hoc Committee to review and refine plans, trouble shoot and collect data. While this work was going on, Revolution Energy also looked for project funding. The financial hurdle for this project brought everything to a near halt in early 2014. Deadline extensions did not result in a funding source, and hopes were seemingly dashed when a bank pulled out of the plan due to a conflict of taking on the debt and the equity of the solar project.
But that’s when the story turns around. Years of work, meetings, conversations, and planning – and Farrell, an Island Manager pushing for this project to succeed – finally came into funding through Ayer Electric. This local contractor, already knowledgeable about Star’s solar goals, stepped in.

But a new funding source meant the need for an entirely new funding plan. This change resulted in Star Island taking on more of an up-front cost while receiving a steady and reliable energy source.

This project is a large investment, approved by the Board of Directors and Solar Project Ad-Hoc Committee, to be paid out over 13 years. Star Island is also working to secure more grant funding beyond several gifts from last year to support the project.

Star Island entered into an agreement with Ayer Electric at the beginning of the summer in 2014, and construction started in August. The project is now online. As the project neared completion in November, Farrell looked back and thought on the process: “It was about to die. Just to see the project – see these rows and rows and rows of panels and realize, wow, this is really happening.”

The move to solar power involves much more than solar panels. Only one supplier of diesel is able to serve Star Island; the reduction in diesel usage will mean fewer trips to coordinate. Changes in equipment further reduce energy demand and byproducts like waste water. Equipment changes include higher quality and more efficient diesel generators to support the solar array.

Located in the shadow of the Tucke Monument towards the top of the rock line, the solar array consists of south facing panels mounted on concrete ballasts. No trails were changed, nor historic landmarks altered. The project is designed to withstand 130 mph winds. And the array has an expected lifespan of 25 years; the batteries about half that. The panels are very durable and can be wiped clean as needed. The Shoals Marine Lab on Appledore Island uses the same model of solar panels and reports that maintenance is not time consuming.