The middle of the 20th century saw a bit of a building boom on Star Island. Buildings went up made of stone, wood, or both. Some were meant to last, some designed as only temporary. All of these buildings still remain and are put to good use. The year of 1953 saw three buildings completed and were dedicated on July 19 of the same year with a short ceremony: the Newton Center Parish House, and the motel units Founders and Sprague.

You’re quite right to wonder why a parish house for a congregation in Massachusetts would be built on Star Island. Fred McGill answers this interesting bit in Somthing Like a Star: “The Newton Centre society, with a declining membership, had voted to sell its property and divide the major part of its resources between the Unitarian church in West Newton and Chestnut Hill. But they offered $30,000 to Star Island, observing that we already had a meetinghouse and a parsonage, but were lacking a parish house; and proposing that the money be used to repair that deficiency, and as a memorial to the Newton Centre church itself.” And so, the building came into being. Designed by then Board President Roger Greeley, the building sits on the site of the old schoolhouse which served the town of Gosport during the fishing village days. Star Island received the donation for this building in 1950, the foundation poured in 1951, and final construction completed in the spring of 1953.

Newtown Center, or Newton as we simply refer to it now, was used in its early years for two purposes. The front room sat around 200 people for talks and lectures, as it still currently does. The back room served as a bunkhouse for youth. Not until the Baker and YPRU motel units were constructed later in the 1950’s did the back room turn into another meeting space. Newtown is now a frequently used spot for evening social hours featuring snacks, beverages and live music, as well.

Below are pictures of Newton being constructed. 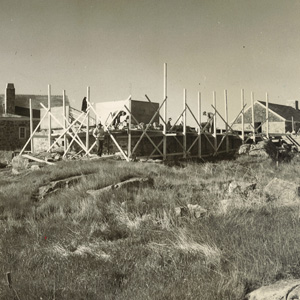 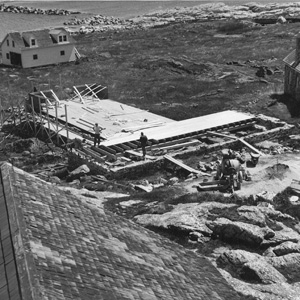 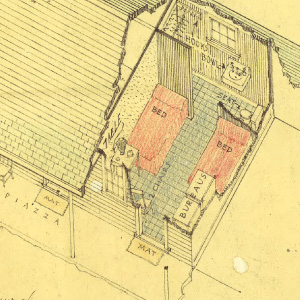 The plan for the motel units were temporary structures. And in 2015 they are still standing strong having received upgrades over the years. The motel units, as seen in the drawing on the right, are one story with a simple layout. The design shows space for two twin beds, two bureaus, a table and chair. And in reality, the actual rooms are not that different from the original plan (just one bureau fits in each room — the rest remains true). 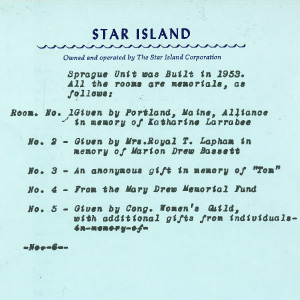 One point in regards to the drawing is the placement of the sink in the half-bathroom located at the back of the room. You might note that the sink is not centered underneath the window. This is really how the rooms were constructed. We’re not sure of the reasoning behind this off-centered approach.

We have more details about Sprague than Founders, including a dedication list for the five Sprague rooms. The list shows a number of organizations and individuals who gave money to help support the construction effort. The dedication plaques for these rooms still remain, and answers the question as to why Sprague 3 is labeled as “Tom” — it has nothing to do with shoes.

The dedication for these buildings, on July 19, featured a short order of service that highlighted the importance of Star Island’s past as well as the future. The Spraque building was named after Isaac Sprague, an important figure in the early stages of Star Island’s history as a religious conference center. A letter to Sprague’s son, of the same name, offers a look into the respect Sprague still carried many years after his involvement. Each new building served a destinct and needed purpose as more people arrived at Star Island’s dock every year.

The short ceremony featured a dedication for all of the buildings: “In gratitude to the great company of those whose gifts have made these buildings possible, for purposes which they cherished, we dedicate the fruit of their giving and pledge ourselves to its worthy use.”

While going through old documents related to the 1953 building dedications, we came across one interesting image. It showed a Star Island populated by many buildings, and absent at least one major structure. This image is of an unknown date, but believed to be sometime around 1950-1952 owing to its inclusion of the Newton Centre Parish House and misplacement of the Founders unit labeled “E-1953 Unit”. Removing what are potentially the Founders and Sprague units, this image shows eight other buildings that could have been constructed. Two of them were built as more motel units — the Baker and YPRU structures — but many more could have populated the east side of the island. 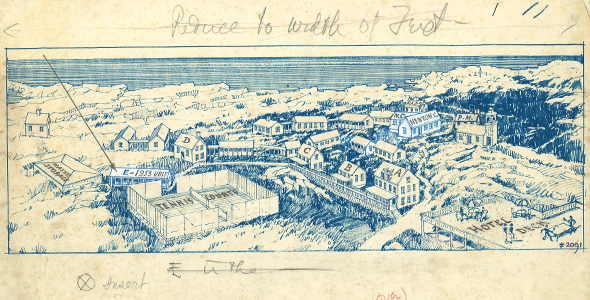 Also, look closely at the image and you’ll see something rather remarkable. In the bottom right hand corner Gosport is missing. In its place is a well appointed deck featuring cafe style seating and table tennis. The deck, located above the front porch, just doesn’t seem like the best place for a ping-pong table though. And this is probably why Gosport is still standing, and those other buildings never came into being. Of course, we jest. But it’s quite interesting to see what one vision of Star Island was back when.