On Thursday, February 5, three organizations from the New Hampshire seacoast partnered to advance their shared vision of a sustainable coastal community and healthy ocean. Hosted by the Seacoast Science Center, staff from the Shoals Marine Lab and Star Island gave a crowd of over 50 people details on the sustainability initiatives that have significantly impacted such things as energy consumption at both island facilities.

After conversation over dinner, which was prompted by trivia placards at tables focusing on each of the three partnering organizations, people gathered in the Interactive Learning Studio to learn more about solar panels, water usage, and composting toilets. Wendy Lull, President of the Seacoast Science Center, and Joe Watts, Star Island’s CEO (below), gave opening words. 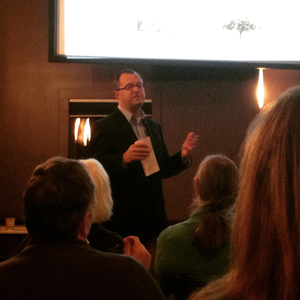 Ross Hansen, the Shoals Marine Lab’s Facilities Director, started the presentation focusing on the undergraduate marine lab located on Appledore Island, the largest island of the Isles of Shoals. Hansen highlighted the valuable impact sustainable engineering interns have had on the facility since 2006. The work of these students has included designing a water treatment system and installing solar panels, among other important projects. 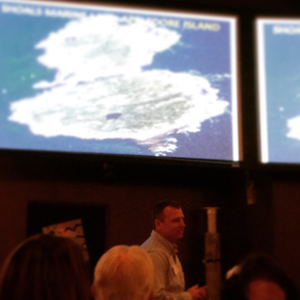 Jack Farrell, Star Island’s Facilities Director & Island Manager, continued the presentation with statistics and annecdotes about Star Island’s push for sustainability starting in 2011. Farrell noted the community effort that has brought changes to Star Island including the re-use of waste items like heat, increase in recycling, and an emphasis on composting. Star Island’s recent installation of a solar array that will power up to 60% of the island’s energy needs capped this portion of the presentation. 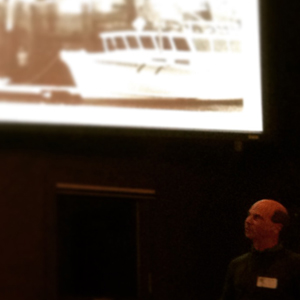 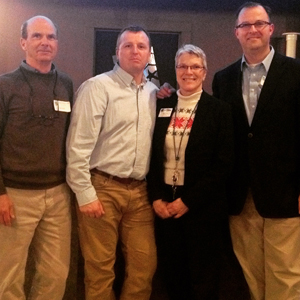