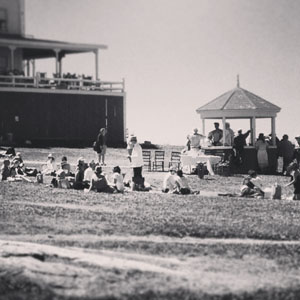 Star Island is throwing a Centennial Party and the public is invited. On June 27th, the Star Island Corporation will host a series of events to commemorate the unveiling of its new solar array and to mark its 100th anniversary as a nonprofit organization.

A special rate is being offered to overnight guests on June 27th.
$100 per person, includes accommodation at the historic Oceanic Hotel, three meals, tax, and gratuity.
(Boat transportation is separate.)

Click here to purchase boat tickets for the June 27th event
Click here to reserve an overnight on June 27th
On June 27th, visitors and dignitaries will board the Isles of Shoals Steamship Company’s Thomas Laighton at 10:30 am for an hour long ocean voyage out to Star. On island guests will be treated to live music reminiscent of the organization’s founding days in the early 1900’s. Visitors can bring a picnic or buy lunch at the Island Grill and enjoy the expansive front lawn. At 12:30 the festivities continue with the cutting of a Star Island Corporation birthday cake and remarks by CEO Joe Watts. A presentation on Star Island’s innovative sustainability initiatives by Island Manager Jack Farrell will follow.

The day of celebration will also include a 2 p.m. ribbon cutting and dedication of New England’s largest off-grid solar array, followed by a tour highlighting Star Island’s history and cutting- edge sustainability efforts.

Day visitors return on the Thomas Leighton at 3:30. Overnight guests leave the island on June 28th at 11:45 a.m.

Star Island CEO Joe Watts says, “This is a wonderful opportunity for people to experience all Star has to offer. The past, present and future will be on display: from our amazing historical roots to our achievement in creating a model of sustainability for New Hampshire. All are welcome and we are excited to share this magical place with the community.”

This is the first year that a tender service is being offered on weekends to boaters and cruisers who drop anchor and want to come ashore. The “Tom Dudley” will deliver people to the island for a nominal fee.

The event is sponsored by Insource Services, Inc.

History
Star Island is one of the nine Isles of Shoals located six miles off the coast of New Hampshire and Maine. Sailors named the island for its points stretching in all directions like the flashes of a distant star. The first people on Star were Native Americans dating back as far as 2000 BC. In 1614, the English explorer Captain John Smith arrived and put Star Island and the rest of New England on the map. For the next 200 years, cod fishing supported the community known as Gosport Village. In the mid-1800s, visitors created a thriving Grand Hotel Era which declined by the end of the century.

The landmark Oceanic Hotel with its simple rooms and elegant parlors is one of the few remaining hotels of its kind and is truly a step back in time. In 1915, the 43 acre island was purchased by the nonprofit Star Island Corp. During the summer months, Star Island welcomes families and individuals to explore Star’s rugged beauty for a day or take part in weekly programs with a variety of themes such as spirituality, world affairs, ecology and the arts. Star Island is an all inclusive vacation retreat where guests are encouraged to unplug and connect with each other and nature.

Star Island Corporation was founded on the principles of the Unitarian Universalist Association and the United Church of Christ, which include respect for each other and the natural environment. As a nonprofit organization, Star Island depends largely on donations and grants to maintain and preserve the Island.

As an island ecosystem, Star provides and carefully manages all of its resources including water, power and sanitation. In addition to solar power, the island has a reverse osmosis system to create drinking water from salt water. The waste treatment facility is in the process of being upgraded and will be the first of its kind in NH.