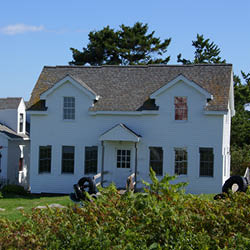 What is the newest building on Star Island? That would be Grammy’s Annex, a well-known spot to island kids since 2000.

Built in memory of Louise Fulton Bush, the barn is one of a number of buildings that are specifically meant to strengthen the youth experience on Star. At the dedication of the building on August 26, 2000, Island Registrar Ed Rutledge said, “with the completion of Grammy’s Annex, a section of the island campus adequate to support our commitment to children and youth has truly become a reality.”

News of the dedication was shared with the Star Island community in the Fall 2000 newsletter. In the article about the ceremony written by Deb Weiner Soule, Louise is remembered as “popular with children and others for her ‘scientific walks’ to the ‘Marine Gardens.’ Sometimes when she arrived on Island, an announcement had to be made requesting that children refrain from swarming around her so that she could go to the dining room and enjoy her lunch. Louise Bush was instrumental in beginning the marine biology program that eventually became the Rutledge Marine Lab on Star. In the early 1970’s, she was a founding member and the first female on the staff of the Shoals Marine Lab on Appledore. After her retirement from teaching, Louise moved to Falmouth, MA where she supervised the Gray Museum at the Marine Biological Laboratories in Woods Hole and continued her research and publishing on marine flatworms.”

Louise is the mother of John Bush, who currently serves as Treasurer of the Star Island Corporation. John’s wife Irene chairs the Island Heritage & Artifacts Committee. Both John and Irene regularly attend the Life on a Star conferences and recently led the Chamber Music Weekend with Jill Brody. Louise’s grandson Drew Bush has most recently worked as a naturalist in the Rutledge Marine Lab on Star.

To view the entire Fall 2000 newsletter, including the article on the dedication of  Grammy’s Annex, click here.

In the most recent Star Island newsletter, a timeline covering Star Island’s first century incorrectly listed the newest building on the Island.  Grammy’s Annex is that newest permanent building.