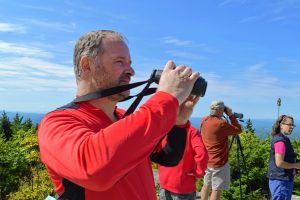 We are pleased to announce Eric Masterson as our theme speaker, talking about “the one bird you won’t see on Star Island”.

Of more than 400 species of birds recorded in New Hampshire, 258 have been sighted from Star Island. That a 46-acre island boasts such a record is testament to the marvel of migration – Star, and other islands in the Gulf of Maine are migrant traps. And yet the Broad-winged Hawk, one of New Hampshire’s best known migrants, is almost unknown on Star Island. Despite a journey that spans two continents and delivers birds to winter quarters deep into South America, the seven mile journey to Star Island is a bridge too far. Eric will talk about their epic voyage through the perspective that he gained cycling a bicycle to the Panama Canal in 2016, following in the wake of several satellite-tagged birds, and his future plans involving a hang glider.

Eric Masterson studied zoology at University College Dublin before moving to the US in 1999. He works for the Harris Center in Hancock NH, where he manages the organization’s 23,000 acres of conservation land.

He is the author of Birdwatching in New Hampshire, a best-selling guide to birding in the Granite State, and is working on a second book about bird migration, as told through the journey of the Broad-winged Hawk.

Eric is a regular guest on New Hampshire Public Radio, serves on the New Hampshire Rare Bird Committee and is a seasonal editor for the quarterly journal New Hampshire Bird Records. He runs the spring and fall birding conferences to Star Island.

Please join us on Saturday, November 23 for another exciting gathering at this year’s Starry Night, Star Island’s annual fall fundraiser!