Oscar the Cod wind vane was born in 1859, a commission by the people of Gosport to both commemorate the long tradition of cod fishing and to provide a means of indicating prevailing winds. He was mounted on a wooden tower, which was blown over in 1892. The vane was damaged, bending the tail. At this time, he was repaired, regilded, and reshipped (mounted) on a new, stronger stone tower built by Oscar Laighton. Oscar stolidly remained in place, a symbol of pride and practical service. He was repaired again in 1931, and restored and regilded in 1947. In 1974, he was unshipped and sent in again to Portsmouth to patch bullet holes (a common fate of wind vanes). This repair was workmanlike, but Oscar was painted bronze by an autobody shop. 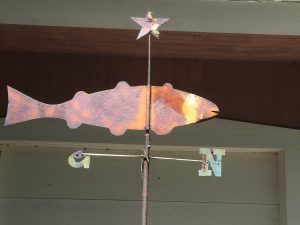 Oscar continued to serve and delight mariners and visitors, but by 2009, he began to show problems. He would occasionally freeze, and the top of the “S” directional was broken. Being unable to turn freely also caused uneven weathering, and put a strain on his tail and the mast he rested on.

In the summer of 2018, Oscar was again unshipped, and returned to Portsmouth for a complete restoration. Long time Shoaler and third generation blacksmith Tom Coleman began a complete restoration. The star and directional were disintegrated, and replicated in a more durable marine bronze. Oscar’s tail was straightened, and he was again patched, cleaned, holes filled, and painted. Finally, he was gilded in triple 24 karat gold leaf, restoring him to his full 1859 glory.

Today, Oscar has been reshipped to his rightful place on the newly rebuilt chapel steeple, high above Gosport and Star, to delight and serve more generations of Shoalers. Shine On, Oscar, Good and Faithful Friend!