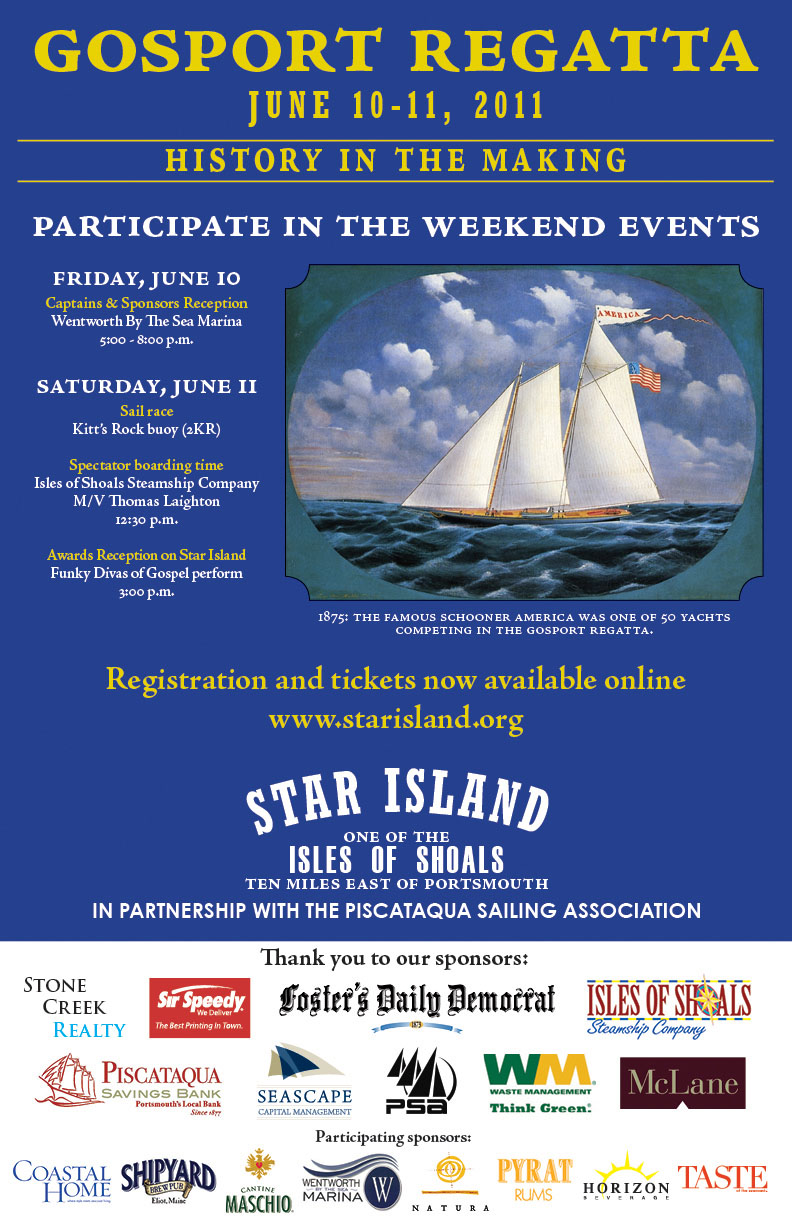 The New Hampshire Seacoast will come alive in early June as a fleet of racing yachts from coastal New England vie for honors in the Gosport Regatta, the resurgence of a vintage sailing race around the Isles of Shoals first held in the late 19th century.

After a successful revival of this historic regatta late last year, Star Island Corporation will host the Second Annual Gosport Regatta on Saturday, June 11, 2011, in partnership with the Piscataqua Sailing Association (PSA). The premier regional pursuit race also kicks off the summer conference season at Star Island, one of the rocky, wind-swept Isles of Shoals, located six miles off the coast of Rye. Star Island is a recreation destination for day and overnight guests who travel to the island by ferry, charter, or in their own boats.

The sailing race, which takes its name from the original Gosport Regatta first held in 1874 at the Isles of Shoals, is expected to draw hundreds of sailing enthusiasts and racing skippers to the Granite State. Competitors from ports as far south as Marblehead, Massachusetts, and north to Portland, Maine, will participate in the historic race, sailing vessels ranging from one-design J/24s to large cruising yachts.

“We welcome Seacoast residents, sailing enthusiast’s and New Hampshire visitors to discover Star Island by participating in the 2011 Gosport Regatta,” Star Island CEO Victoria Hardy said. “The traditional race offers guests an extraordinary glimpse of life as it was in the 19th century at Star Island and the opportunity to experience an exhilarating race at the Isles of Shoals. We look forward to hosting the New England sailing community at Gosport Harbor once again this year.”

The original race was organized by John Poor, president of the Stickney & Poor Spice Trading Company, to celebrate the grand opening of Star Island’s Oceanic Hotel. More than 50 boats participated in the first race. The race was won by the famous yacht America in 1875? the sailboat for which the America’s Cup is named.

“We had a great event in 2010 with 37 boats racing and more than 300 spectators,” said PSA Commodore Jim McCarthy. “Our competitors had a great time and all plan to return for the 2011 race. We expect an even larger racing fleet this year, with boats visiting from Maine to Massachusetts. We are happy to be a part of bringing back such a traditional and high-profile regatta to the New Hampshire Seacoast.”

Race day will begin at 11 a.m. Saturday, June 11, 2011 at the mouth of the Piscataqua River near Kitt’s Rock buoy (2KR). The Performance Handicap Racing Fleet (PHRF) pursuit format will start with staggered starting sequences based on class and handicap. The course will have both up wind and downwind legs based on wind conditions and will conclude in Gosport Harbor.

Spectators may purchase tickets in advance to board the official race day spectator boat – the M/V Thomas Laighton – at an early bird cost of $55 per person. The vessel will depart Portsmouth from the Isles of Shoals Steamship Company dock at 1 p.m. for the cruise out to Star Island alongside the race boats.

After the race, ticketed spectators and sailing crews are invited to come ashore for a catered reception and awards ceremony on the front lawn of Star Island’s Oceanic Hotel. The Funky Divas of Gospel will perform live during the celebration.

A regatta weekend pass offering access to the captain’s reception and the spectator boat will be available at an early bird cost of $85 per person. Race registration and ticket sales will begin in late March. For more information, visit www.starisland.org or www.sailpsa.org.

Proceeds of the non-profit fundraising event will support Star Island’s programs and services. Corporate sponsorships are now available to support the preservation of historic Star Island.

Sponsors for the 2011 Gosport Regatta to date include Foster’s Daily Democrat, Sir Speedy Printing, Stone Creek Realty, LLC, and the Wentworth by the Sea Marina. The Wentworth by the Sea Marina in New Castle is conveniently located just a few miles from the official Gosport Regatta starting line and serves as an overnight docking option for competing sailors or spectators. For more information, contact the marina at www.wentworthmarina.com.

ABOUT PSA
The PSA serves the sailing community in the Seacoast by organizing a weekly schedule of races through the summer, plus special weekend regattas. Its mission is to expand awareness of, education about, and participation in the exciting sport of sailboat racing. Boat ownership is not a requirement for membership or participation and anyone interested in crewing on a boat is encouraged to join. For more information, visit PSA’s website at www.sailpsa.org.

ABOUT STAR ISLAND
Star Island Corporation was established as a non-profit corporation in 1916 to hold and administer Star Island and its historic properties for religious, educational, and kindred purposes. From the late 1890’s until 1916, descendants of the Laighton and Thaxter families owned and operated the hotels on Appledore and Star visited by some of the most prominent artists and writers of their day including Childe Hassam and Nathaniel Hawthorne. Some of the cottages on Star date back to the 1700s, the fishing village era of the Township of Gosport. Open to the public from June to September, the island offers recreation interests for all ages including gift and book shops, a snack bar, the Rutledge Marine Lab, Vaughn Cottage and the Thaxter Museum. The island hosts more than 3,000 conference attendees and overnight guests and 7,000 day visitors throughout the summer. Guests enjoy a 19th century experience with 21st century amenities. All meals are served family-style in the Oceanic dining room. For more information, visit Star Island’s website at www.starisland.org or contact its Portsmouth offices at (603) 430-6272.