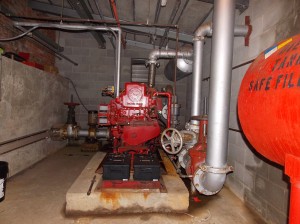 With the help of a $100,000 grant from the Large Grant Program of the Unitarian Universalist Congregation at Shelter Rock in Manhasset, NY, Star Island continues to make necessary life safety upgrades to its historic buildings and grounds.

“With their island guests and visitors in mind, Star Island has put their heart and soul into fire and life safety improvements over the past several years and they can be proud of their accomplishments,” said Rye Fire Chief William Sullivan.

Replacing the water pump comes during a year when Star Island is also renovating part of the Oceanic Hotel’s front wall and porch, reconstructing guest shower stalls, and tending to the usual upkeep of many 19th century wooden buildings.

“As we continue our commitment to make capital improvements on Star Island, we are so pleased to have the significant support of partners like Shelter Rock,” Star Island’s CEO Joe Watts said. “The new pump is a vital part of our plans in sustaining a safe and welcoming family and community camp.”

Shelter Rock supports Star Island beyond this significant grant, and provides many scholarships to religious educators to attend Star Island’s Lifespan Religious Education conference held each summer. Star Island was also the recipient of another $100,000 grant from the Large Grant Program of Shelter Rock in 2008.