From “Jubilee,” by Mary Chapin Carpenter:

In the early spring of 1946, a young contractor stepped off a boat onto the Star Island pier. His first step wasn’t actually onto the Star Island Pier — rather it was onto the roof that used to cover the end of the pier, which had collapsed during the four years the Island had been declared off-limits by the US military. He found that many of the conference center’s buildings were significantly damaged as well – broken windows, open roofs, collapsed ceilings, failed plumbing – and the first conference was expected to arrive at the end of June. 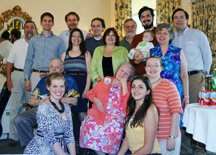 Dick Soule was a young Boston contractor recently returned from the Pacific Theater of World War II. He says he was hired to work for the Star Island Corporation because they couldn’t find another Unitarian contractor in Boston. He was eager for work for his fledgling business, and he was taking his first trip out to Star to see what he was in for.

For him, the first passage to Star was not a memory bathed in glowing light, but the beginning of fifteen years of hard work and little reward. It turns out that the greatest reward was reaped not by him, but by his family, whose lives were all changed immeasurably despite the fact that most of us were yet unborn.

We have all journeyed to Star Island many times, but each of us at one time made a first trip to Star, and for those who were not too young to remember the experience, we probably now look back to it as a life passage of the same order as birth, first love, marriage, first child. It was a passage to a new place, a new community, a new perspective on the world, a new milepost on our annual calendar and yes, to a new life as well.

And so it was with us: Dick brought his wife, Phoebe, to the All Star conference in the late ‘Forties, and Marc Soule was brought as a baby in 1949. Dick saw what kind of a place it was and wanted his family to be a part of it.

Oscar and Vera Weiner heard about Star Island at their Universalist church in Akron, Ohio, where they picked up a brochure published by the Star Island Corporation describing the benefits of a summer retreat for families. They decided to try it out the following year, 1953, with their baby daughter, Debbie. They were completely taken by the Island and the friends they made, and kept coming back. After only four years they were asked to be Co-Chairs of the All-Star I conference the next year, in 1957 (which was also the first year that there were two All Star conferences).

Gerry and Ben Soule arrived on Star in 1956, which Gerry does not remember and Ben has only fading glimpses of. (Technically, Ben’s first passage across those waters was different than that of most people, as it was in the reverse direction in utero, but there are no memories of that!)

Returning to the Shoals became a way of life, although we’re not sure how intentional it was. Each of our families returned year after year during the 1950s and 60s, although the Soules stopped coming as a family for a while after Dick was fired by the Corporation in 1963. Deb and the Soule brothers naturally wanted to be Pelicans when the time came, and we all did that, starting in 1969. It was that summer in July that Jane Dennison, now Jane Soule, came to one of the UCC conferences as a family babysitter, and in a coincidence we pieced together only much later, was in the hotel lobby with us — and most of the people on the Island — all of us watching Neil Armstrong step onto the surface of moon. Only now do we see the parallel to each of us Shoalers, taking a first step onto our own new world.

The story goes on, with twists and turns along the way: Jane and Marc met as Pelicans in 1974, and were married in 1977. Ben married Ann Baxter, another long-time Shoaler, in 1979. Children followed – Emily, Nathan, Bethany – all of whom came to Star as small babies. And when Ben married Deb after Ann’s death, we brought Abby out for her first passage at 9 months old. Our children grew up surrounded by Star Island people – their parents, grandparents, their parents’ Pelican and All Star friends, their own Star Island friends. One of the things that we hold as sacred is our enduring friendships with people we first met on Star as small children or as Pelicans. The ties are very strong, yet they require nurture to endure.

Of course Emily, Nathan and Bethany became Pels in their turn, but not before their cousin Eban, Gerry’s older son. Gerry had stopped coming to Star years ago and had never brought his family, until one time when Phoebe was celebrating her birthday on the island while she and Dick were out working end of season. Eban immediately caught the bug and said to his father, “Why did we never come here before?” The next summer he was back, working as a Pel. And he was back again this summer for Pel Reunion.

The summer of 2013 brought two other significant Star events to our family. This was our daughter Abby’s first year as a Pelican, and she is the fourteenth member of our family to have worked on Star. Abby, who has never known anything but Star in her life, was relentlessly worried about being a Pelican. First, would they accept her application? And then, would she have friends? Would she like it? Could she do the work and do it well? What if she got next-boated? What if she were the first member of the family to NOT like it? Would we still love her anyway? Endlessly the worrying went on, with us pleading, “Abby, just give it TWO days.” After depositing her at the dock to make the trip out for the season, we saw her talking with other Pels while waiting for the boat. And four hours later, Deb got a text message: “Made friends :>)” Phew.

And second, there was the arrival of Gabriel Deaderick Soule for his first visit to Star, becoming the first fourth-generation Shoaler in our family: his father Nathan, of course, has spent those endless summers on Star, serving on night crew, waitrae, Snack Bar, and more. His mother, Cayce, survived the family initiation ritual of working for a summer on Star (which our niece, Bethany’s husband Mitch also did), and lo and behold, Cayce took to the place. So it was pretty much in the tea leaves that Gabe would come, and the expectation is that, about eighteen years from now, he’ll be on the Pelican roster, too. If he wants to!

So this year, we are thinking again about how our family’s connections to Star keep growing and widening, and how it started for each one of us. Our family is not unique in this regard. We’re sure you, in reading this, heard echoes of your own family experiences in our stories. We know we’re not the only ones to have fourteen members of the family working at Star – we know the Williams/Stewart family shared that record, for instance. And we’re not the only four-generation family to have Star in our lives: we know that the Powsner family has such a connection and you might, as well.

What we do know is that, as island historian and sage Fred McGill told us, ‘the treasure isn’t that which is buried somewhere on the island’: it’s in the enduring beauty, the love of friends and family shared in that amazing place, the stories we tell and hand down, in the love we show to one another. That’s the freal gold that’s on the Rock, and the cause of our own Jubilee.

‘Cause the people who love you are waiting
And they’ll wait just as long as need be
When we look back and say those were halcyon days
We’re talking ’bout jubilee.

This message was originally delivered as the homily during the All Star 1 Governance Council Meeting on October 27, 2013 in Chester, CT.