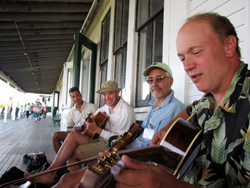 I have been coming to Star Island almost each summer of my life. I also spent an entire summer on island as a Pelican. There are certain songs that “bring me back” and each one would be included on my Star Island playlist. The choices are as varied as the weather and the ice cream flavors, so bear with me!

Do you have your own Star Island playlist? Share your songs and what they mean to you with us by emailing ambassadors@starisland.org.