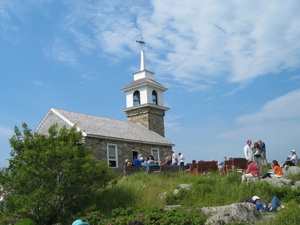 This spring Star Island’s stone chapel will see two significant upgrades to its structure resulting in the occupancy level increasing to 91 people. These upgrades consist of installing a sprinkler system and new door to the structure built in 1800.

The upgrades, while substantial, are designed to blend in with the historical structure. For example, the sprinkler system is recessed into the ceiling. Sprinkler heads will pop out if activated, and piping will be housed in the attic out of view. The new door is a replica of the current door, which was already in need of repair.

As part of a long-term safety upgrade plan, the sprinkler system is made possible from the extension of the sprinkler pipe main which will run from the Oceanic Hotel to the Stone Village. This extension will eventually connect with the other main running out along the motel units to form a continuous loop. The main extension is funded by the Unitarian Universalist Congregation at Shelter Rock grant which also allowed Star Island to purchase and install a new water pump for the fire safety system. 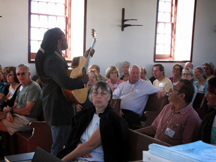 The chapel’s sprinkler system will be installed by the Gobbi Corporation of Greenland, NH who will volunteer the time and materials for the project.

The new chapel door will be installed to allow proper egress from within the building. Jeff Thurston is constructing the door a year after he showcased his handiwork by reconstructing the windows and frames for the Oceanic Hotel lobby.

“This is one of the coolest buildings in New Hampshire,” said Jack Farrell, Star Island Facilities Superintendent and Island Manager. “The work we will undertake this spring allows more people to be in the space and enjoy it together.”

The chapel in its current form was constructed in 1800. According to Ten Miles Out by Lyman Rutledge, the chapel had two earlier iterations in the same location: the first built in 1685, the second in 1720. These earlier chapels, or meetinghouses, were made of timber and both burned down. The chapel was used for a variety of purposes through the years including a town hall for Gosport, food storage, and religious practice.

Click here to learn more about the history of Star Island’s chapel.