The summer season is definitely over, as the weather reminds us most days, but our work on Star Island continues deep into the autumn. About fifteen staff members will remain on island through the end of this week, and a smaller crew returning for the next couple of weeks. The island staff tend to their usual fall tasks which include such things as cleaning all the linens on island, flushing water from pipes, and dismantling the reverse osmosis machine.

In 2014, several groups of contractors are joining our island staff to complete important projects. The solar array, which is about a month away from completion, includes the placement of large concrete blocks as a foundation for the solar panels and other supporting infrastructure. As you may have heard during a sustainabiltiy talk on island this summer, the solar array will provide apporximately 60% of Star Island’s energy needs starting in 2015. We look forward to kicking off next summer with a ribbon cutting/flip switching ceremony. 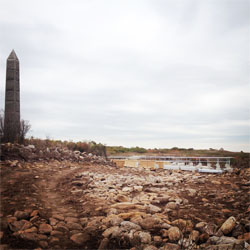 Pier upgrades have been ongoing for several weeks now. The ocean side of the pier has been reinforced with additional concrete adding stability to the structure during storms. Large rocks, known as riprap, will also be added to the ocean side of the pier to lessen the force of storm swells. The top of the pier started a transformation yesterday. Much of the top layer will be demolished and replaced with a new top of concrete and supporting materials. 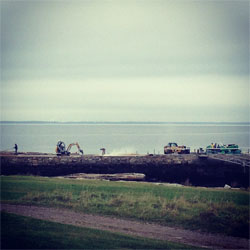 And while the summer has its usual sights of boats sailing past and beautiful sunsets, autumn on Star Island sees a barge parked in Gosport Harbor. This barge recently brought more heavy equipment to the island to support the solar and pier projects, as well as a used flatbed truck to replace one recently decommissioned on island. 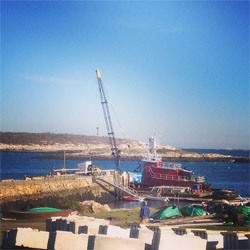 These projects can be completed because of the support of our community through grants, donations, and volunteer work. We are greatly appreciative of all the support. If you’d like to donate to our Annual Fund to support these ongoing projects and plan for another successful year, please Click Here.