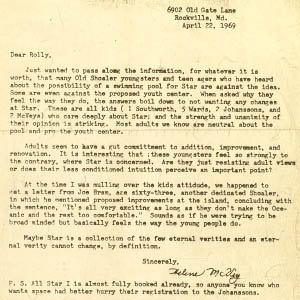 On July 2, 1969, a letter was sent to Shoalers seeking their opinion regarding a proposed addition to the Star Island grounds. That addition being a salt water pool. This pool, let’s be clear, never came to be, but it did provide ample opportunity for people in the Star Island community to think about such an ammenity.

The letter that Shoalers received from Board President Roland B. Greeley in 1969 talks about a pool not in the traditional sense of one with “tile and chromium”; rather, an “artificial, salt-water, sanitary pool with enough ‘prepared’ space around it so that it affords opportunity for pool-side visiting, for swimming in water 5 to 10 degrees warmer than the ocean, but probably not for diving in the formal sense.”

We bet there are a number of you who wouldn’t mind a swimming area 5 to 10 degrees warmer than the ocean. During the summer, our morning polar bear swimmers are often dipping into water that hovers in the high 50’s and low 60’s. Yet the warmer water of an artificial pool did not come to fruition. But why?

We have rather little to work with in terms of archives for this pool proposal (a pun would probably work quite well about now), so the actual reason might be lost. What we do know is that of the responses Greeley’s letter received, there was a consistent mention of youth not wanting it. And, in one letter, which is dated several months prior to Greeley’s, there is a rather poetic view of youth standing in the way of change.

On April 22, 1969, Helene McVey writes her friend Rolly (who we believe to be Roland B. Greeley), to say: “Adults seem to have a gut committment to addition, improvement, and renovation. It is interesting that these youngsters feel so strongly to the contrary where Star is concerned.” McVey’s letter reports that a number of youth are simply “against the idea” of a swimming pool, and even a proposed youth center. And the reason? McVey writes: “their answers boil down to not wanting any changes at Star.”

McVey’s letter, and the letter Greeley sent out seeking opinions, both represent the Star Island community so well. A community that relies on discourse and debate, of proactive involvement.

Once you get over the idea of a swimming pool on island, you might wonder where one would have been installed. Drawings of the proposed pool place it below the summer house, very close to the Caswell Cemetery, and very much in the part of the lawn used as the outfield for softball games. Another proposal sought to re-make the cistern ponds by the Art Barn for swimming pool use.

The conclusion of the salt water pool proposal is obvious to people who have been to Star Island: there is no pool (unless you’re counting tide pools, in which case we have many). But the outcome remains a mystery, at least to those of us in the office. We are not sure what the final vote of the Board was, or if a vote was even held. Maybe so many youth were against this proposal that the idea of a pool never seemed to float.

We’d be remiss to leave out the postscript in McVey’s letter. She reports that All Star 1 is nearly full in April of 1969. That’s our reminder to tell you to register for your summer program before it fills up.

And if you know anything about the salt-water pool proposal from 1969, please share your information with us. You can mail any documents you have to 30 Middle Street, Portsmouth, NH 03801 or email ambassadors@starisland.org.