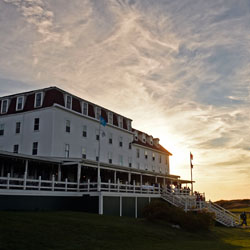 The New Hampshire Land & Community Heritage Investment Program has awarded Star Island’s Oceanic Hotel $100,000 for historic preservation. The funds will go towards replacing siding on the Victorian Era hotel located on the second largest of the Isles of Shoals. The 2016 grant is the largest ever received by Star Island to help preserve the hotel. NH Governor Maggie Hassan presented the awards in Concord on December 15th.

“Star Island is grateful for LCHIP backing this important project,” said Star Island CEO Joe Watts. “This financial support helps us make improvements to the historic hotel so it can withstand severe weather and an ocean environment. Star Island’s Oceanic Hotel is a Seacoast treasure that welcomes thousands of visitors each summer. We are pleased the state shares our view that the Oceanic deserves community support.”

The Oceanic Hotel, recently named to the New Hampshire Preservation Alliance Seven to Save list, was constructed in 1876 by John Poor, President of Stickney Poor Spice Co. It is the largest of 34 buildings on the island, and is the last remaining Grand Hotel in NH that has not been completely renovated.

The preservation work made possible by this grant will focus on restoration including framing repairs, sheathing and rain shield, as well as preservation work on the porch. The total project cost is over $280,000 and is expected to be completed by this summer. LCHIP previously awarded grants in 2010 and 2014 to help with the Oceanic preservation. Those prior grants were instrumental in replacing the hotel roof and restoring the North and East order cialis with prescription facades.

Star Island is working to raise awareness about the historical importance of the Oceanic, and will be hosting informational talks in early 2016, as well as fundraising for the project. Star Island is a 43-acre island six miles off the coast of NH and Maine. It is owned and operated by the nonprofit Star Island Corporation, which hosts 60+ conferences with a wide variety of themes each year. Tax-deductible donations to the Fund for the Oceanic may be directed to Star Island Corporation, 30 Middle Street, Portsmouth, NH 03801. For more information, please contact Pam Smith at psmith@starisland.org. To learn more, please visit StarIsland.org.

The New Hampshire Land and Community Heritage Investment Program is an independent state authority that provides matching grants to New Hampshire communities and non-profits to protect and preserve the state’s most important natural, cultural, and historic resources. Its legislatively mandated mission is to ensure the perpetual contribution of these resources to the economy, environment, and the quality of life in New Hampshire. Up until the current grant round, 341 LCHIP grants have helped 143 New Hampshire communities conserve more than 278,000 acres of land and 180 historic structures and sites. The $36 million of state money invested in these projects has leveraged more than $234 million in funds from other sources. LCHIP grants are supported by fees on four documents recorded at the Registry of Deeds in every county of the state. For more information about LCHIP visit lchip.org or call (603) 224-4113.