It’s getting toward evening on Star Island and I’m struggling to do anything but watch the sky change. The sheer blue of a July day slides into pinks and oranges, the horizon going ember bright. I’m not alone in my fixation. Shoalers gather along the Oceanic Hotel’s front porch or in the Summer House. Pelicans pause their chores to peer out windows. A sunset is a slow form of entertainment. Also a simple one. And yet we can’t look away.

Though I now live many miles from Star Island, I often think about those sunsets. I think, too, of how close I came to never seeing them. When I was twenty, scrambling for work, I had a choice between taking a cushy tech internship in a familiar setting—or becoming a waitress in a place I’d never been. A friend had encouraged me to apply to be a Pelican, though he had trouble explaining what that meant. After rambling vaguely about a hotel and a worker-run talent show, he said finally, “Living on Star Island is just…different.”

Some months later—having thankfully opted for the unfamiliar—I understood why a precise explanation of Star Island had been difficult. After making my first boat ride out of Portsmouth Harbor, after sweating and singing in the communal effort of a luggage line, after reveling in the rocky splendor of the New England coast, I understood that the full Star Island experience can’t quite be described. You can only see it, live it, soak it up. Then miss it terribly once you’ve left.

I’m a writer now (no longer a waitress, bellhop, or baker). My first book comes out this October. My path as a writer is one I feel lucky to have taken and one I owe, in many ways, to my time on Star Island. There’s a reason so many artist-types have been drawn to the Isles of Shoals over the years. The geography is made of inspiration. Beyond the aesthetics—the raw wind and sea spray, the pink blossoms of beach roses and the stately weathered architecture—there’s the gift of stepping away from the mainland. An island like Star, with its view of the New England coastline, grants perspective. It offers another way of seeing: a chance to reflect on our ordinary lives. Separating from the mainland also comes with risk—there’s a reason fire safety is endlessly emphasized to new arrivals—but risk can also go hand in hand with creativity. It can be what pushes someone to put a brush to canvas, a pen to paper. To try something new. To experiment. To create.

“All kinds of strange and remarkable creatures find their way here,” wrote Celia Thaxter of the Isles of Shoals. She was speaking about an unusual white bat flapping around one summer, but the sentiment holds true for people as well. Star Island is plentiful with sites for solitude—the nooks between boulders and ledges jutting out towards the sea—but it also offers community. All kinds of strange and remarkable people make their way to the Shoals. I write this in the most loving sense and with the utmost gratitude. Creativity is often discussed in terms of a singular vision or a bolt of inspiration, but I would argue that creativity is equally derived from the exchange of ideas and the presence of supportive peers. As I prepare to release my first book into the world, I can’t help but reflect on the friendships I made on Star Island, the wisdom and support those individuals have shown me over the years. The true magic of Star Island is that its gifts—the memories, the community, the courage to be your truest self—stay with you even long after you’ve left.

Allegra Hyde will read from her award-winning story collection,
Of This New World, at RiverRun Bookstore in Portsmouth on
November 18 at 7PM

For more about Allegra, visit www.allegrahyde.com 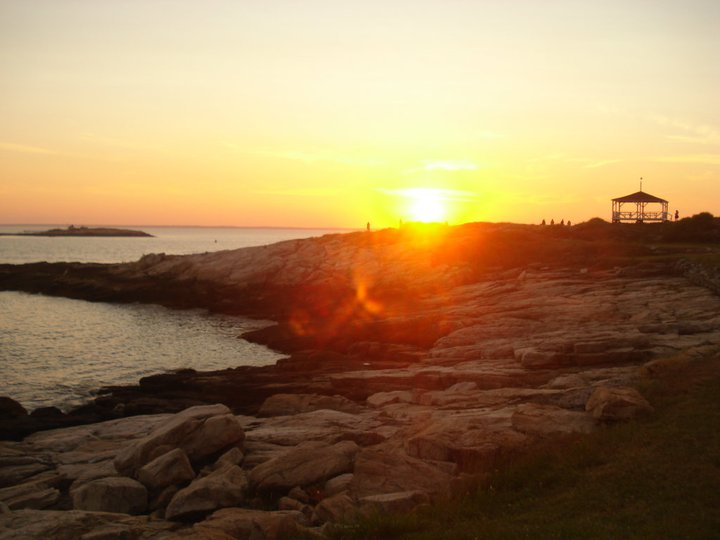