Becoming a Shoaler by Nelson Linscott

The winter months after my first visit to Star Island were cold and dreary. Baxter was not feeling himself again, but who does feel well trudging through slush and snow dreaming of warmer months ahead? As storms raced through, I thought of Alex de Steiguer, the longtime Star Island winter caretaker, out there on her watch. I thought of different areas of the island in snow and ice, aided by photographs by Alex. It had been months since I had stood on Star Island rock, yet I was still Starstruck. Star Island had changed me for the long term and wasn’t letting go. I wasn’t resisting. I love Star Island. I began thinking of the next trip. The tug of the island ebbed and flowed like the moon to the sea.

Winter held on into April, but when the last storm came and went and the first signs of spring were apparent, I started planning. More importantly, I came to the realization that Star Island is my Spirit’s Home. There was a reason I was being tugged back to the island. During my first visit, I realized that Star Island isn’t just the beauty of the island and the buildings, it was the love of the people. Now I realized it was more than that. Before I visited, I was not sure I realized I had a spirit. Now, not only do I realize I have a spirit, it resides on Star Island. “Whoa”, the old hippie said. “This is getting heavy!” Heavy it is. Let it be. 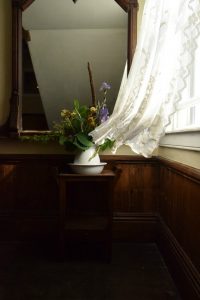 Planning began in earnest. I had specific photos I wanted to take. I already had them in my head. The iconic Oceanic stairway curtain shot was one. I realized with the numbers of visitors that have come to Star Island, with every phone there was a camera, and most every area had been photographed, but not every photograph had been taken. I was going to put on my magic glasses to see things that hadn’t been seen before and record it through the lens of my camera. That intimidated me for a few days, but I decided that I shouldn’t plan a thing. “I’ll just let it fly!”

June came very quickly, and unfortunately, Baxter began feeling sick. On the exact day the year before, Baxter became very ill. Money is always a problem for me and I began to worry. For days, Baxter didn’t eat and hardly drank water. I was desperate. I explain to the vet that I was broke and my dog may be dying. He agreed to see him. Baxter was prescribed antibiotics and an appetite stimulant. On the day we were heading to the island, it didn’t look good. The meds didn’t seem to work. Two hours before the boat was to depart, I had to make a decision.  I decided to stay at home. I was heartbroken and very concerned that Baxter wasn’t long for this world. A friend gave me the advice to go. I was suddenly struck by the epiphany that Star Island would save Baxter. We headed to Portsmouth and to the dock.

The day was clear and warm, I was very stressed out, and Baxter was feeling ill. In his stroller, he was panting in the heat, shade was hard to come by. A woman was sitting by the loading dock eating a bacon sandwich. I had placed Baxter on the ground so he could squeeze himself into a small spot of shade right beside the lady and her sandwich. Two pieces on bacon fell from the woman’s sandwich and Baxter jumped on them and devoured the bacon. I thought, “Oh NO!  He hasn’t eaten for days!” I was waiting for the eruption, but he held it down and started feeling a little better. I was still apprehensive as we boarded the boat, and within minutes we were on our way to our second visit to our Spirit’s Home.

Due to a change in rules, we didn’t take the Thomas Laighton – we took the work boat with the baggage and the Pelicans. Though I had seen the Pels the year before, I hadn’t been alone with them off duty. Oh to be young again, I thought as they talked, listened to music, overflowing with energy. I had to laugh. Some of the antics were hilarious. I could tell the one newcomer was a bit overwhelmed by the experienced Pels, but the time we hit the dock, he was joining in the festivities. We were about a half hour ahead of the Laighton. Baxter and I headed to our room for a little rest and relaxation before the all-important fire and water safety class. We were back! I had rejoined my spirit. It was time to explore. I felt much more relaxed than I did the year before. It was like I had never left. Baxter had other plans – he fell asleep. While Baxter slept, I went to supper, joining old friends and making new. I found that there was a veterinary tech in the house. I began to regain my confidence. When I returned to my room, Baxter peeked to make sure it was me and fell back to sleep. It’s OK, I thought, I am back at Star Island. I am among friends. What could go wrong!