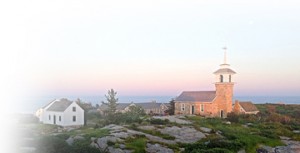 As a conferee since my childhood in the 1970’s, with twenty stints as minister-of-the-week and eight seasons as a conference chair, I thought I mostly knew how Star Island runs. Working here for the past two summers, however, I have been amazed at how much I still had to learn. For example, I have long known about the tremendous spirit of generosity that goes into sustaining our traditions. All year round, people contribute an abundance of “time, talent and treasure.” Most of our regulars know about the importance of financial giving to our Annual Fund and the McGill Society. Anyone who has helped plan or run a conference event knows something of how much time and talent people give to our community. But I was surprised to discover the depth to which volunteerism goes into all the other aspects of keeping Star going.

For an idea of the impact that Star Island’s volunteers have, just consider the chairs. If you have ever sat down on Star Island, you have personally been supported by a volunteer’s handiwork. There is a whole team of volunteers dedicated just to maintaining wicker. They spend days patiently making repairs and weaving new seats. (Can you imagine Star without our front porch rockers?) Or think of the 350 dining hall chairs, every one of which was carefully cleaned by volunteers one weekend. Numerous other volunteers, coming and going all summer, worked at refinishing the dining chairs one-by-one. Then there are hundreds of other chairs spread out in hotel rooms and staff quarters – cleaned mostly by volunteers every spring during open-up. So, if that many volunteers go into sustaining just one facet of Star Island’s charm, imagine how much generosity goes into maintaining Star as a whole!
The way I see it, Star Island is a gift that we give each other. Every year, I see how Star Island can bring out the best in people. And people, when they are at their best, naturally want to play a part in sustaining Star as the inspirational and transformative place it has been. Ultimately, though, the best gift we can give each other is to continue visiting and spending time together here – because that is the primary ingredient that makes Star Island what it is.