This is my fifth summer on Star. I know – a mere infant in Star life – but nonetheless an interesting vantage point from which to experience this precious 40 acres. Every week is a self-contained whole that gives us a quite complete variety of personae – intellectual, fun-loving, music-in-every-moment, traditional – the list of qualities is as endless as the number of conferences. Each family arrives and seems to live out a year in a week. It is fascinating as much as it is invigorating. I am blessed to be present with each and every group.

For me, the satisfaction measure of each week is the HQ or happiness quotient. What are Shoalers saying? How are you experiencing the island? What’s the overall satisfaction level? I listened to learn what was meaningful to you in 2013 and heard best Pel show ever, appreciation for thoughtful attention to food sensitivities, the island has never looked better. Some other comments from the summer of 2013 include:

Speaking of sustainability, Shoalers of all ages want to help. Upon earning a whole $16 at her lemonade stand this summer, this Shoaler explained to her aunt that she would give $1 to Star Island and save the rest for college. The perfect split of resources for a community minded six-year-old. 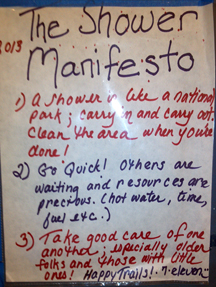 Of course, the showers were the talk of the town this season. Those who loved them emphatically said so. And then there were a few who longed for the old days of towel-wrapped guests of all ages sharing stories while waiting for their turn on a shower line that moved quickly as one jumped out to dress and another jumped in. As one conferee put it, “With all these improvements I’m running out of material for talent show skits!” And speaking of showers, one day a “Shower Manifesto” appeared on the door of the women’s shower room.

Here it is in all its naked beauty. Where did it come from? Well, we’ll never know who, but it clearly came from the core values of this island from its very founding moments. Resources are precious. Take care of one another. Carry in – carry out. Doesn’t that just speak to who we are?

These comments and so many more during the 2013 season indicated a very high HQ. I like to think of this in part as the result of a promise fulfilled. We started a journey in 2007 that is still unfolding up to and including the post-campaign grant this year of $100,000 from the Unitarian Universalist Congregation at Shelter Rock to install sprinklers in the chapel and replace the fire pump. Make no mistake, 2007 was not the worst of times in the life of this island. That summer gave us all the opportunity to join that unbroken chain of Star Stewards established by Thomas and Lilla Elliott in 1897 with the very first conference on Star. We are in good company and we are grateful to be part of such a vibrant and sustaining community of generous Shoalers. It probably won’t be the last time the Star community will face a daunting challenge. It is a reminder that anything and everything is possible. It just takes a small group of determined individuals who won’t stop until the task is complete. Were it not for you all, would this island have survived?