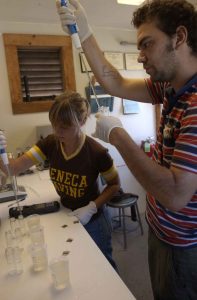 Plans for the new wastewater treatment/reclamation system on Star Island are moving forward and our groundbreaking project should be operational next year! Financing approval for the project was assured last July with the signing of formal documents for a low-interest loan from the State of New Hampshire Department of Environmental Services (DES) under the EPA’s Clean Water State Revolving Fund. This program has until recently provided money only to municipalities for wastewater improvements. Recent changes in the program guidelines have opened the program to non-profit organizations. Star Island was the first non-profit in the state to qualify for a wastewater loan, which has a low fixed interest rate and a term of twenty years.

In addition to finding a reliable system that can address our seasonal occupancy fluctuation and effectively manage the high nutrient content of the island waste stream, engineers were also asked to recommend an approach which reduces electricity demand, and can allow recycling of treated wastewater for uses such as toilet flushing and irrigation.

In February we received the final report from Underwood Engineers including specific recommendations for a new system and other improvements to the waste stream process. The report followed extensive meetings with regulators over the past eighteen months, and represents a truly collaborative approach to meeting a broad range of goals for an improved system.

The first recommendation in the Underwood Report is to install an expanded grease trap system that can remove more waste materials from the kitchen flow before they hit the treatment plant. This system will be installed this spring. A series of large plastic chambers will contain the wastewater from the kitchen, slowing it down long enough to cool. This allows suspended fats, oils and grease to be captured for later disposal before it reaches the waste treatment plant. Such removal is essential to efficient and reliable operation of any system. 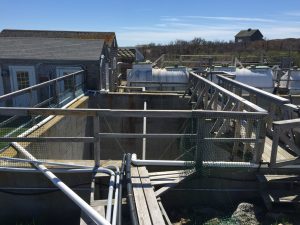 The report goes on to evaluate ten different treatment system options on the basis of cost, feasibility, visual impact, ease of operation, quality of treated effluent, energy consumption and other factors. Underwood recommends a system called Amphidrome, in technical terms a “submerged attached growth biologically active filter (BAF).” These systems are manufactured in New England and have been successfully deployed in hospitals, resorts, schools, office parks and similar developments with large wastewater demands not serviced by public sewers. The system, which fits entirely within the existing waste treatment tanks, relies on bacteria and filtration to process up to 17,000 gallons of island wastewater per day, using only 10% of the energy of our current system!

The final product, after disinfection similar to that used in our drinking water system, is expected to be non-potable re-use. No longer simply wastewater for ocean discharge, this reclaimed resource will ultimately be used to flush island toilets and for lawn irrigation. Star Island is working with DES to help write the rules for the use of recycled wastewater in what is recognized as an important pilot project in New Hampshire that will have statewide benefits for waste treatment and water conservation efforts.

Final approvals are expected in mid summer 2018, allowing construction to begin shortly thereafter. If all goes as planned, the new system will be in operation for the 2019 season.

As an island community, Star faces the need for constant self-resilience and adaptability. Our sustainability program, the Green Gosport Initative, encompass all of our efforts to use limited resources in a creative and conscious manner, while conserving where we can. Learn more. Learn more at www.starisland.org/green.